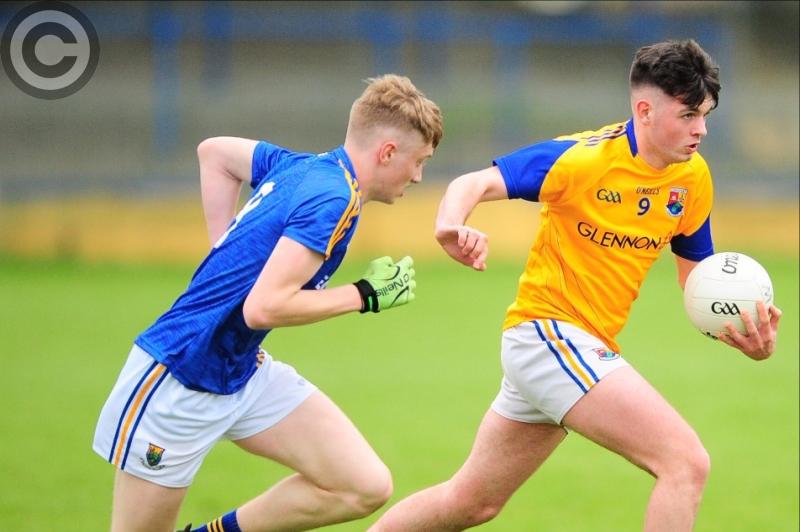 Ciaran Reilly, the captain of the Longford minors, pictured in action against Wicklow in the opening round of the Leinster Championship at Glennon Brothers Pearse Park. Photo: Declan Gilmore

Some surprise results have materialised in the Leinster Minor Football Championship this year which suggests a more open than usual race for the provincial title and Longford will have hope when they take on Dublin in the quarter-final at Parnell Park this Saturday, throw-in 3pm.

The general opinion is that the metropolitan minors are not as strong as normal this season and that fact was reflected in the first round clash at home to Meath a few weeks ago when they appeared to be in serious trouble at one stage.

A nightmare first half performance left Dublin trailing by no less than ten points (1-10 to 0-3) at the break but they produced a remarkable recovery in the second half to gradually close the gap as the visitors were restricted to just a solitary score.

A cracking goal from centre-half-forward James Doran in the 56th minute was followed by a late Mark Tracey point as Dublin smatched a dramatic draw and eventually emerged victorious by 1-15 to 1-13 after extra-time.

Man of the Match Doran, who registered 1-5 from play, will be a familiar figure to some of the Longford players as he featured on the St Aidan’s Whitehall team that beat St Mel’s College in the second round of the Leinster Post-Primary Schools Senior ‘A’ Football Championship last December.

Another St Aidan’s player, powerful midfielder Donal Ryan, will also be in action for the Dublin minors on Saturday and that comeback win over Meath will have boosted their confidence considerably as they prepare to meet Longford.

Having said that, Meath were subsequently knocked out of the championship when they let a comfortable lead slip from their grasp in their 0-11 to 0-10 defeat in Navan against Laois in the qualifiers while also gone are Wicklow who lost out by four points away to Wexford.

Westmeath also failed to come through the back door when they suffered a surprise defeat against Carlow at Cusack Park with a solitary point separating the sides at the final whistle after the home county, holding a six points lead, collapsed in a dramatic finish.

It remains to be seen whether that trend will continue in the quarter-finals this weekend but Longford are facing a difficult task away to Dublin with injury ruling out defender Dylan Corcoran (St Mary’s Granard).

Inspired by excellent wing back Shane Farrell with the Kenagh lad firing over six cracking points from play, Longford beat Wicklow by 1-19 to 3-8 in the first round game at Glennon Brothers Pearse Park back on April 22 but not before withstanding a very determined comeback by the garden county.

Karl Dermody’s side appeared to be cruising to a very easy win when they established a commanding 1-11 to 0-0 advantage with 26 minutes gone in the first half but the visitors came storming back on the changeover to cut the deficit to just a couple of points.

But Longford regained the upper hand as the scores began to flow again with influential corner-forward Dylan Farrell (St Brigid’s Killashee) clocking up a total of five points (two frees) during the course of the game.

The county minors would obviously have preferred to avoid Dublin but that was the hand they were dealt in the draw and they will head to Parnell Park in a determined bid to cause a big upset.

The Longford line-out in the win over Wicklow was as follows: