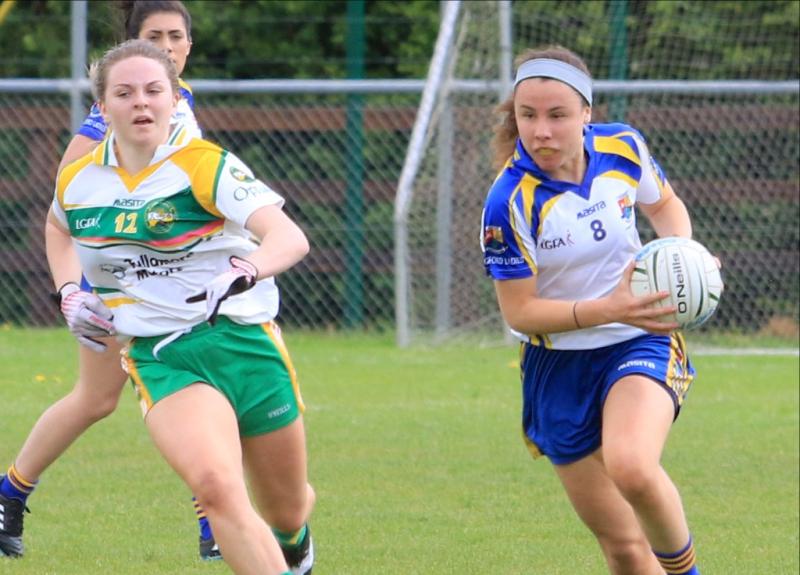 Aisling McCormack pictured in action for Longford against Offaly in the Leinster Ladies Football Minor 'A' Shield Final in Kinnegad on Sunday last. Photo: Syl Healy

Longford U-18 ladies ran out very easy winners over Offaly when they claimed the Leinster Minor ‘A’ Shield title after dominating the final at Coralstown/Kinnegad on Sunday last.

It was Una Clarke that got the opening score of the game for Longford in the 4th minute; Ciara Healy played a lovely ball into Una and she made no mistake in finding the back of the net.

Ciara Healy got a point in the 7th minute between Offaly points from Chloe Sheridan and Vicki Carey. Then Longford took a hold on the game. Niamh Darcy and Jessica Barry pointed before Sheridan was sin binned for Offaly in the 13th minute.

The next five points from Longford were scored by Ciara Healy (2) and Una Clarke (3). Longford keeper Rebecca Stavuse made a fine save from Mary Harkin in the 28th minute as Longford went in at the break 1-8 to 0-2 in front.

Straight from throw-in at the start of the second half Longford got a second goal through Ciara Healy. It was a real blow for Offaly who were hoping to use the wind to their advantage.

Ciara Healy (free) and Una Clarke followed with points to extend Longford’s lead to 14 points. Offaly could only tag on two points. Down the other end Aoife O’Brien got on the scoresheet for Longford and in the 44th minute they had a chance to stretch their lead when they were awarded a penalty. Ciara Healy took the spot-kick and made no mistake in drilling the ball to the net.

Substitute Kara Shannon grabbed another goal for Longford in the 44th minute and Una Clarke added another point minutes later as Longford were relentless in attack. Ciara Healy and Chloe Sheridan exchanged frees as Offaly lived off scraps. Any time they tried to create a score Longford defended resolutely.

Chloe Sheridan hit over another free in the 51st minute but that was Offaly’s last score of the game. Longford continued to clock up scores the final 10 minutes. Una Clarke hit over a wonderful point in the 52nd minute and that was followed by another from substitute Niamh Brady who then got Longford’s fifth goal.

Kara Shannon hit over two excellent points with Una Clarke getting the final score of the game for a far superior Longford side.