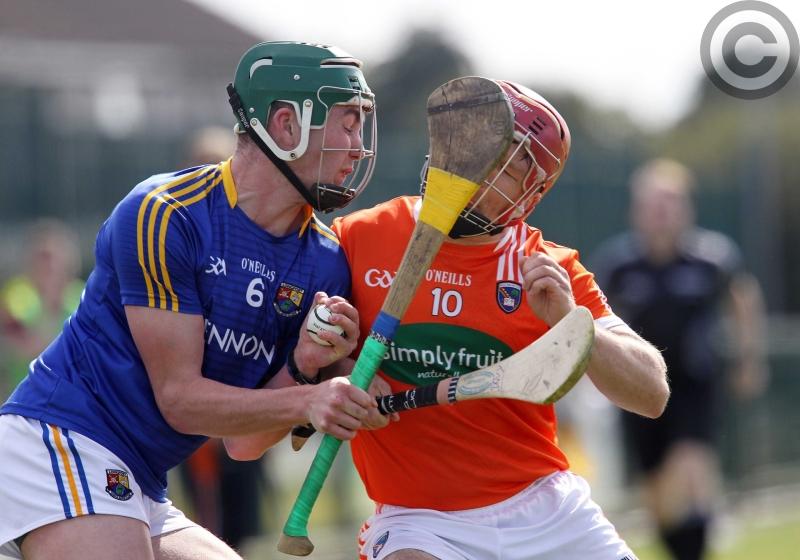 The Longford senior hurlers found the going too tough against last year’s beaten finalists Armagh in this one-sided Nicky Rackard Cup quarter-final clash at the Crossmaglen grounds on Saturday last.

With no relegation in this year’s Nicky Rackard Cup, results mattered little for Longford who were in bonus territory but they did want to put in decent performances against teams playing at a higher level.

Longford battled hard against Armagh at this same stage of the championship last year but there was to be no repeat of that on this occasion. Ray Gavin’s side were missing a few players including influential forward Cathal Mullane (injured) along with Johnny Casey (unavailable).

Armagh were dominant in all areas of the field and Longford struggled. They also didn’t get the rub of the green with refereeing decisions which left their management team frustrated at times.

For the second Nicky Rackard Cup game in the space of a week, Longford defender Gerard Moore was sent off for getting two yellow cards and Armagh also finished the game with 14 men.

Aided by the strong wind, Armagh opened the scoring in the first minute with a point from Nathan Curry before Longford’s Paddy Walsh cancelled that with a free. David Carvill hit over his first free of the game in the 4th minute before the Orchard County got their first goal through Fiachra Bradley.

Paddy Walsh hit over two more frees for Longford but Armagh got back on top and by the 14th minute were four points ahead. An excellent Cathal Carvill point was followed by two David Carvill frees while Armagh also hit a number of wides.

In the 27th minute Longford keeper Conor Gallagher pulled off a superb save to deny Nathan Curry who got a point minutes later. A goal and a pointed free from David Carvill extended Armagh’s lead to 12 by  the 33rd minute and they added on three more points before the break to hold a very commanding 2-12 to 0-3 advantage.

Longford started the second half brightly with Paddy Walsh firing over a fantastic free while Reuben Murray got the first point from play for the midlanders.

But  a mistake in the defence allowed Armagh in for their third goal in the 43rd minute and they were a lot more clinical in front of the posts.

Shane O’Brien hit over two fine points in a row for Longford but David Carvill replied for Armagh with two points (one free).  Paddy Walsh hit over another free for the visitors but substitute Caolan Rice responded for Armagh and then in the 57th minute they got a fourth goal through corner forward Conor Corvan.

Seamus Hannon got Longford’s ninth point  in the 58th minute but once again Armagh were on target down the other end with Corvan and Danny Magee getting points.

Paddy Walsh and Reuben Murray got late points for Longford with Walsh’s sideline cut being one of the best scores of the game. They lost Gerard Moore near the end when he received a second yellow and while it was a disappointing end to the season for the Longford hurlers the main target of winning the National League Division 3B title along with promotion was achieved.