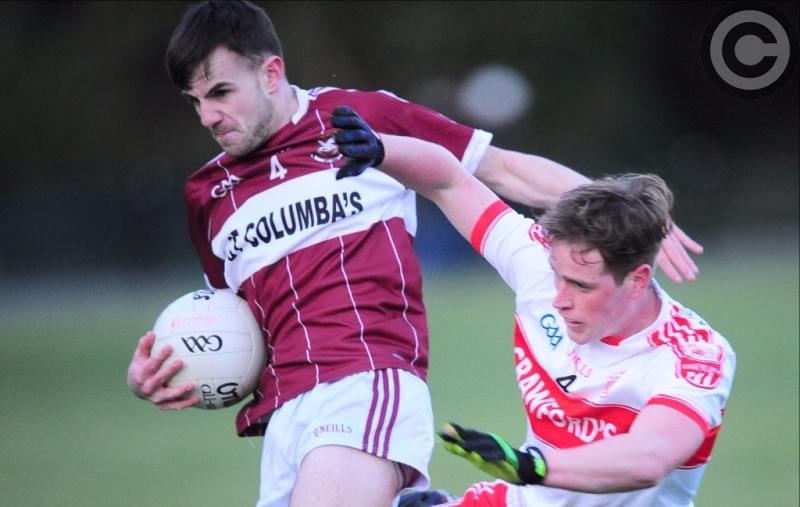 James Mooney on the ball for Mullinalaghta in his bid to evade the challenge of Abbeylara opponent Cian Brady. Action from the All County Football League Division 1 game at the Laurels. Pic: D Gilmore

In a repeat of last year’s senior football championship final, Mullinalaghta maintained their unbeaten run in Division 1 of the All County League after scoring a most emphatic win over neighbouring rivals Abbeylara at the Laurels on Tuesday evening last week.

All County Football League Division 1 - Round 4

St Columba’s were nearly always in control as they registered their fourth consecutive success this season and will be hard beaten in the quest to regain the coveted Connolly Cup on the evidence of this impressive performance that saw them coming out on top by the wide margin of 11 points in the finish.

The county champions were particularly sharp in attack with all six forwards getting their names on the scoresheet and Mickey Graham’s side are currently playing with a swagger that clearly suggests a high level of confidence even at this early stage of the campaign.

Having said that, Abbeylara were without a few regulars and were only three points behind when Robbie Smyth converted a free in the 27th minute. Moments earlier, Eamon Gallagher raced through and was well placed to score a goal but the chance was squandered when he elected instead to pass the ball to the tightly marked Sean Murphy.

Mullinalaghta then struck a decisive blow when Conor McElligott fisted the ball to the net in the 29th minute, after a David McGivney free dropped short of the posts, and that more or less settled the issue with a number of tough tackles developing during the course of the game.

While Abbeylara defender James McEntire surged forward to fire over a fine point in stoppage time to leave his side trailing by 1-9 to 0-7 at the break, the under pressure Robbie Smyth lost the ball when a badly needed goal might have materialised in the opening minute of the second half.

Although Jason Kelly slotted over a free soon after, Abbeylara failed to register another score until the third minute of stoppage time when Robbie Smyth (free) was on target and it was a very poor effort overall from the visitors on the changeover.

St Columba’s clicked into a higher gear to clock up another eight points - three from David McGivney (frees) along with a cracking couple of scores (play) from Aidan McElligott while Conor McElligott, James McGivney and Rian Brady also shot over the bar.

Under new manager Danny Brady from Mullahoran, Abbeylara should be a different proposition when they get back to full strength but were always fighting a losing battle on this occasion as St Columba’s established a comfortable 0-8 to 0-3 advantage after 19 minutes.

Three of the points were fired over by Jayson Matthews, the last of which was a goal chance there for the taking, while Rian Brady (2), James McGivney (a great long range strike), John Keegan and David McGivney were also on the mark for Mullinalaghta.

Kevin Smyth, Sean Murphy and Robbie Smyth (free) replied for Abbeylara, who closed the gap with a further point apiece from Murphy and Robbie (free), and there was then an exchange of frees between David McGivney and county attacker Smyth.

It was a tight enough contest at this stage with St Columba’s holding a 0-9 to 0-6 lead but from the moment Conor McElligott grabbed the goal for the home side the writing was on the wall for Abbeylara who were well beaten in the end.