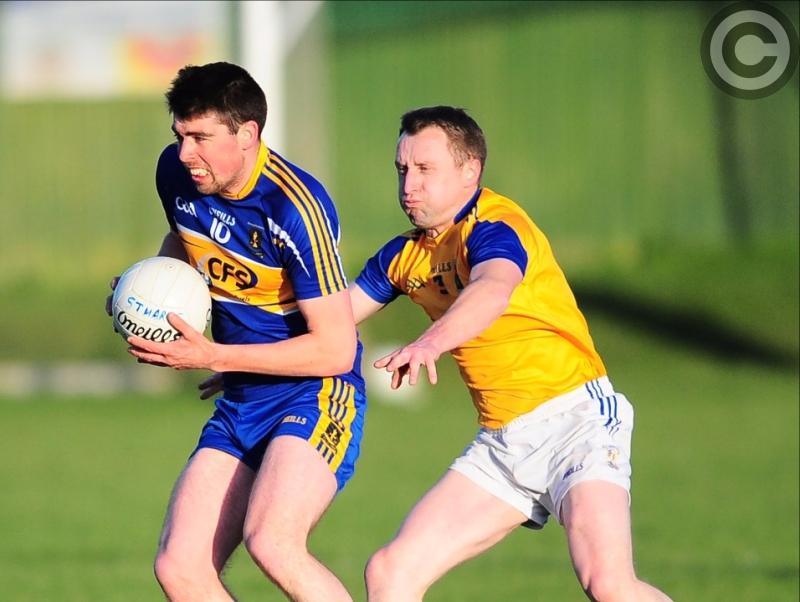 Bernard Sheridan on the ball for Dromard in this tussle with Granard opponent Brian Sheridan. Action from the All County Football League Division 1 game at Higginstown last week. Pic: Declan Gilmore

An excellent point from Paul Smyth, along with a free converted by Darren Gallagher, were the scores that settled the game as St Mary’s defeated Dromard in Division 1 of the All County Football League at Higginstown on Tuesday evening last week.

All County Football League Division 1 - Round 4

The two goals were crucial as Granard grinded out a badly needed result after losing their opening three league fixtures.  Just like in their previous games, Granard got off to a poor start but Niall Sheridan’s side battled back to eventually come out on top in a tight contest.

Dromard had enough chances, particularly in the second half, to get something from this match but have only themselves to blame as they should probably have scored a couple of goals.

The sides were all square when Diarmuid Masterson shot over the bar in the 59th minute but St Mary’s finished the stronger with those late, late points from Paul Smyth and Darren Gallagher clinching a hard earned win.

The immense Brian Sheridan was the driving force for Granard throughout the game and the home side suffered a couple of setbacks in the first half when both Liam O’Rourke (after only five minutes) and Declan Hynes (29th minute) were forced to retire injured.

Dromard registered the opening point of the game inside the first minute and Cian Mimnagh followed up with a point. Francis McGee then fired over a free in the 8th minute to give Dromard an early three point lead.

Declan Hynes (free) got Granard’s opening point and then straight after they went ahead with a goal from Kevin McGauran, who finished to the net after collecting the ball from Derek Sheridan.

A nice point from Liam Sullivan extended St Mary’s advantage but Dromard hit back with points from Emmet Masterson, Cian Mimnagh and Francis McGee (free) to regain the lead by the 24th minute.

In the 28th minute Granard levelled matters with a lovely point from Eoin Higgins and Kevin McGauran was unlucky not to get a second goal moments later; diverting his shot just wide as the sides went in all square at the break, 1-3 to 0-6.

St Mary’s made a terrific start to the second half with Liam Sullivan’s low drive ending up in the back of the net and substitute Ian Small was  fouled two minutes later with Darren Gallagher firing over the resulting free.

Dromard replied with a point from a Francis McGee free and then Cian Mimnagh slipped when a goal was on.  Darren Gallagher (free) and Peter Reynolds (excellent point) exchanged scores before Dromard got right back into contention with further points from Jamsie Martin (free) and Diarmuid Masterson.

With the game deadlocked going into stoppage time, a draw looked the likely outcome but up stepped Paul Smyth to score a wonderful point for Granard who made sure of the success when Darren Gallagher slotted another free over the bar.