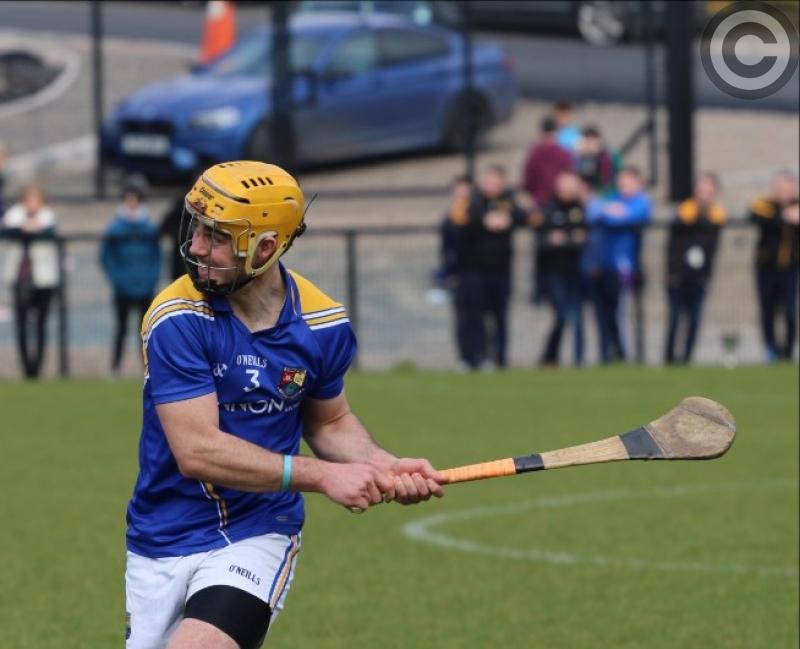 Karl Murray pictured in action for the Longford hurlers against Warwickshire in the National League Division 3B Final.

With either Donegal, Derry or Tyrone in the draw for their opening Nicky Rackard Cup game, Longford senior hurling manager Ray Gavin always knew they would be pitted against a strong outfit.

The one team they hoped to avoid was Derry and typically that’s who they were drawn against with the Round 2A fixture scheduled for the Derry GAA Centre of Excellence in Owenbeg on Saturday, throw-in 3pm.

Gavin said: “The best draw was probably Tyrone. Regardless of what turned out,  you are in that competition so you have to play those strong teams at some stage. Longford have gained promotion  to Division 3A of the National League next year and you are going to have to play a higher standard of teams. We have nothing to lose and will have a cut at  Derry.”

Although he’s a realist, the Longford boss is optimistic about his side’s chances away to Derry with nothing to lose.  “All we can do is go up there and give it our best shot and see where it brings us. Knowing that Slaughtneil were in an All-Ireland Club semi-final against Cuala, this is a very tough task against a Derry side who were competing in the Christy Ring Cup last year.”

Longford’s main aim this year was promotion in the league and with that achieved Gavin admitted that confidence is high in the camp. “We have no fear. We scored 3-17 last week against Meath’s U-21 team. Lads are going well and are hurling with confidence. That’s the one thing that has definitely come out of winning the league final is the high level of confidence.”

Derry defeated last year’s Lory Meagher  Cup winners Louth 2-17 to 1-12 in the opening round of the Nicky Rackard Cup on Saturday last and have quality in their side.

Gavin compared Warwickshire to the Ulster County with the exiles laden with players from top hurling counties.

“This Derry team won’t be much different that Warwickshire with the type of quality they have. It was a great achievement for us to beat Warwickshire in the Division 3B league final.  Having the Slaughtneil lads will give the Derry hurlers a big lift and they will be targeting a place in the Nicky Rackard Cup Final at Croke Park . ”

Gavin has come up against Derry before when he was with Westmeath five years ago. He said: “The first year I was with Westmeath in 2012, the first away game we had was above in Celtic Park. They were playing in Division 2A at that time. That’s where they are coming from and are rated the strongest team in the Nicky Rackard Cup.”

Playing quality sides like Derry can only help Longford’s progression and Ray Gavin is delighted with the performances of the local lads who have really come to the fore.

“It’s another step in the right direction and it’s all progress for the lads. The likes of 19 year old Daire Duggan was outstanding in the couple of challenge matches and against Warwickshire in the league final in his development as a hurler. John Mulhern too, another Longford lad. He has given 100%. Karl and Reuben Murray, Paul Barden also. All those lads are learning every time they go out to play for Longford,” concluded Gavin.