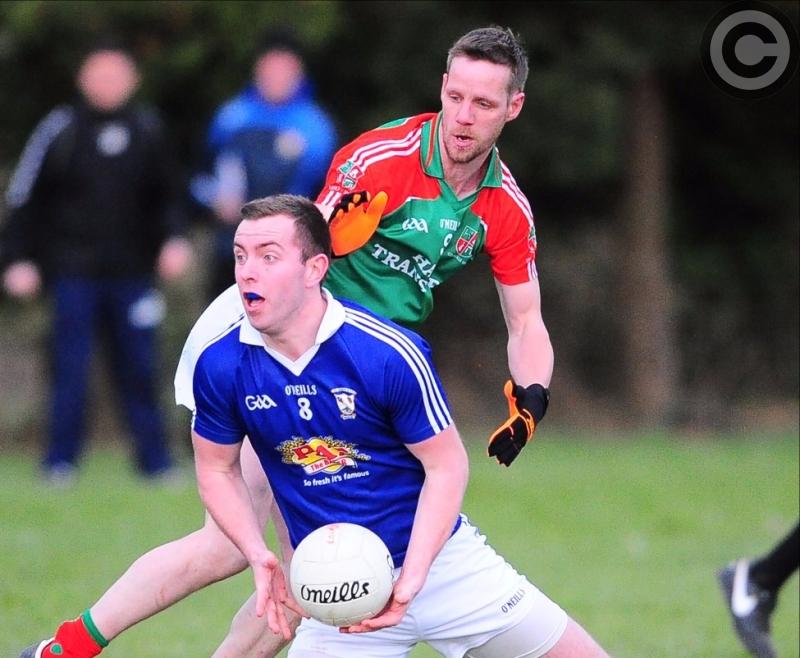 Charlie Martin on the ball for St Mary's Granard in this tussle with Colmcille opponent Declan Farrell. Photo: Declan Gilmore

Inspired by the impressive Declan Reilly at full-forward in the first half, the sharp Colmcille attack inflicted considerable damage to shoot Granard down in a high scoring All County Football League Division 1 clash at Higginstown on Saturday evening last.

All County Football League Division 1 - Round 2

With the former county player causing havoc with his excellent distribution of the ball and who created the first two cracking goals for Cormac Hughes (1st minute) and Paul McKeon (10th minute), wind assisted Colmcille established a commanding 2-4 to 0-1 lead with the points coming from Rory Hawkins, Barry McKeon (free), Noel Farrell and the playmaker Reilly.

Minus the services of key defender Thomas Gallagher (injured), St Mary’s solitary score in the early stages came from a free converted by Liam O’Rourke but they got right back into contention with well-taken goals from corner-forward Liam Sullivan (13th minute) and corner-back Vinny Nally (15th minute).

When Sullivan fired the ball over the bar in the 19th minute, the narrow margin of just two points (2-4 to 2-2) separated the sides but Colmcille regained the upper hand to clock up another 1-4 during the remainder of the first half.

The goal materialised when Noel Farrell was fouled in the square and the same player made no mistake from the resulting penalty in the 21st minute while the points were registered by Rory Hawkins (free), a brace from midfielder Declan Farrell with Darren Mulligan also on target.

Liam O’Rourke (free) replied for Granard, who trailed by 3-8 to 2-3 at  the break, but they gradually closed the gap on the changeover following further points from Darren Gallagher, Liam Sullivan, substitute Declan Hynes and Conor Mallon (free).

In between those four scores for St Mary’s, Noel Farrell fired over a free for Colmcille who were leading by 3-9 to 2-7 before they struck the killer blow with a fine goal from Ruairi Harkin in the 42nd minute.

Ruairi (son of former Granard great Mickey Harkin) cut in from the left to find the back of the net and in a short space of time they succeeded in adding another 1-3 to their most emphatic tally.

Barry McKeon set up Darren Mulligan for the fifth goal in the 45th minute while the points were kicked by Rory Hawkins, Cormac Hughes and wing back McKeon.

St Mary’s, to their credit, battled it out to the bitter end and scored three more points through Declan Hynes (2) and another replacement Ian Small along with a consolation goal from a Liam Sullivan penalty in the 56th minute.

Colmcille were not finished yet with Rory Hawkins grabbing their sixth goal in the 58th minute to leave them 11 points clear at the final whistle and the clubs will meet again in the group stage of the senior championship in the summer.