Killoe gradually get the better of Colmcille in hard earned victory 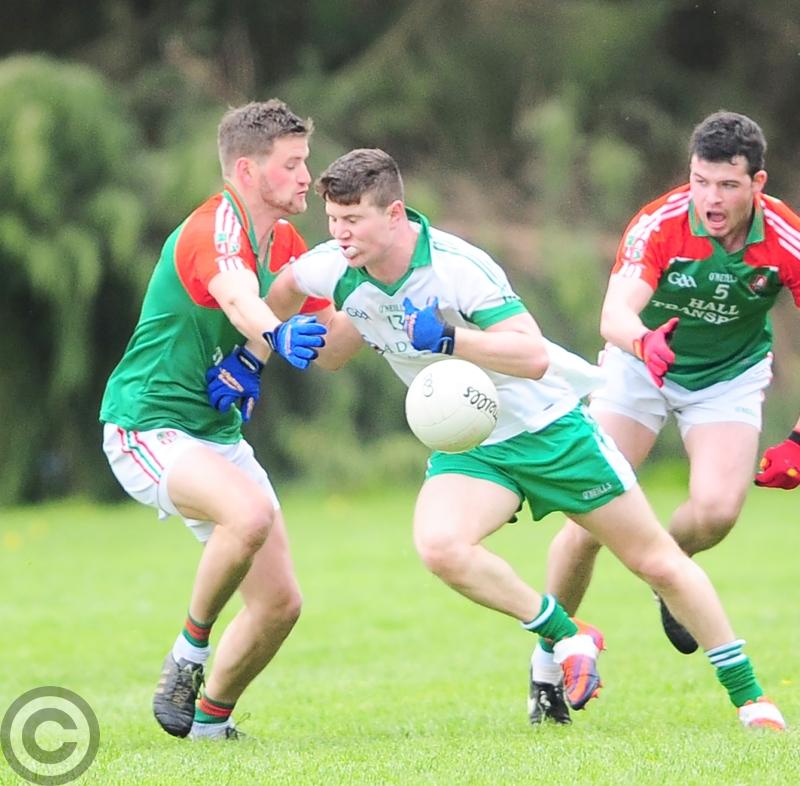 Larry Moran on the ball for Killoe Emmet Og in his attempt to find a way past Colmcille opponent Paul McKeon with his brother Barry also in the picture. Photo: Declan Gilmore

Colmcille, under new manager Stephen Coy, had to play the final quarter of the contest with 14 men after Padraig Murtagh was sent off for an altercation with Michael Quinn. At the end Niall Farley (Colmcille) and Padraig McCormack (Emmet Og) received second yellows cards while Colmcille were also hit with injuries to key players Ciaran Brady and Cathal Reilly in the first half.

Reilly’s injury saw Colmcille awarded a penalty and Killoe’s Shane Clarke was lucky not to have received a  black card after taking down the player in the square. The full-forward Reilly was a major loss for Colmcille in the second half.

The game was evenly poised at 1-9 apiece in the 46th minute when Padraig Murtagh was shown a straight red card after clashing with Michael Quinn who received a yellow card.

With the extra man advantage proving decisive, Killoe edged in front and got the vital scores. Colmcille closed the gap to two points in the 56th minute but that was as close as they got.

A pointed free from Rory Hawkins opened the scoring in the 3rd minute but Killoe hit back with three points in a row from Quinn, Jamie King and Sean McCormack (free). Darren Mulligan replied with a fine point for Colmcille before McCormack brought a fine save out of Colmcille keeper Mark Kiernan in the 12th minute.

Hawkins second free  in the 14th minute left Colmcille level but a free from King put Killoe ahead again in the 15th minute. Two minutes later Colmcille were back in front when Darren Mulligan played a terrific ball into Cathal Reilly who struck a powerful shot into the back of the net.

Mulligan followed up with a point to put three between the sides in the 19th minute. Jamie King and Barry McKeon (an excellent score) then exchanged points before King got a goal for Killoe in the 26th minute to put them ahead again.

In first half stoppage time Cathal Reilly was in possession when Shane Clarke brought him down. A penalty was awarded with Rory Hawkins putting the ball over the bar. Both sides scored late points as Killoe led at the break by 1-8 to 1-7.

Colmcille were level again in the 33rd minute but it all changed when Padraig Murtagh was sent off midway through the second half. Sean McCormack hit over a soft free to put Killoe ahead and they stretched the advantage with further points  from Cian Farrelly, Daniel Mimnagh and Paddy Kiernan by the 52nd minute.

Paul McKeon (free) and Darren Mulligan replied with points for Colmcille to keep their hopes alive but Killoe got late scores to clinch the victory.