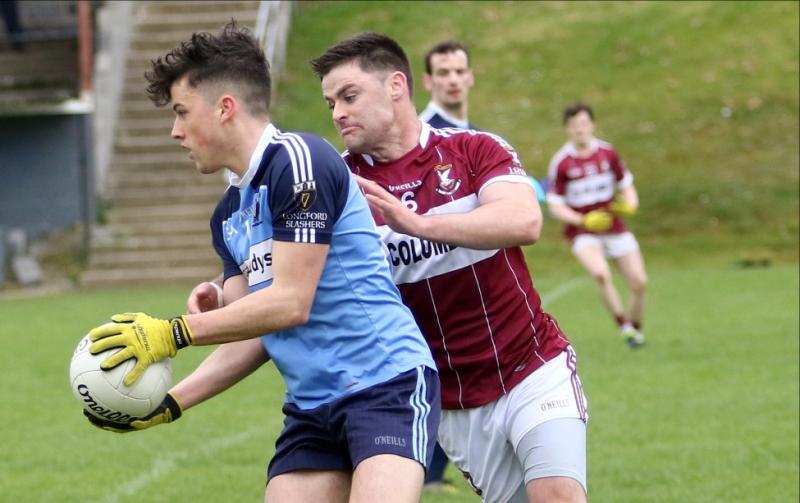 Mullinalaghta St Columba’s made a comfortable winning start to the new season with the wide margin of 11 points to spare over Longford Slashers in the All County Football League Round 1 clash at Michael Fay Park on Sunday last.

Even against the wind in the first half, the county champions were in control and from the moment John Keegan finished off a fine move for the only goal in the 12th minute it was clearly evident that Slashers were fighting a losing battle against superior opposition.

Shane Mulligan, Donal McElligott and Gary Rogers were involved in the slick attack that led to Keegan flicking the ball to the net and even the loss of James McGivney for a black card offence in the 20th minute failed to hamper St Columba’s who led by 1-7 to 0-4 at the break.

David McGivney fired over four of the Mullinalaghta points (three frees) with John Keegan, substitute Rian Brady (replacing James McGivney) and Jayson Matthews accounting for the other scores in the first half.

On target for Slashers were Andrew Dalton (free), Daniel Smith (two frees) and newcomer Peter Lynn and in a bright start to the second half Robbie Clarke cut in from the left in his attempt to engineer a badly needed goal but his pass was cut out as St Columba’s dealt with the danger.

Midfielder Barry Gilleran then went close as the home side created another goal chance and the opening score of the second half did not materialise until the 43rd minute when Robbie Clarke shot over the bar.

Moments later Mullinalaghta replied with a point from Rian Brady and a free apiece were then exchanged between David McGivney and Daniel Smith, the latter landing what proved to be Slashers last score of the game in the 50th minute.

St Columba’s dominated the remainder of the match to register five points in a row, the first from a Jayson Matthew fisted effort in the 53rd minute when a goal was there for the taking in a neat move that also involved James Mooney and Aidan McElligott.

Another score followed immediately from Aidan McElligott and then Rian Brady fired over a free before David McGivney put Conor McElligott through for a well-taken point in the 57th minute.

Another sweet Rian Brady strike from play brought the scoring to a close and St Columba’s were generally in a very confident frame of mind in this emphatic victory with the sides set to clash again in the group stage of the championship in the summer.