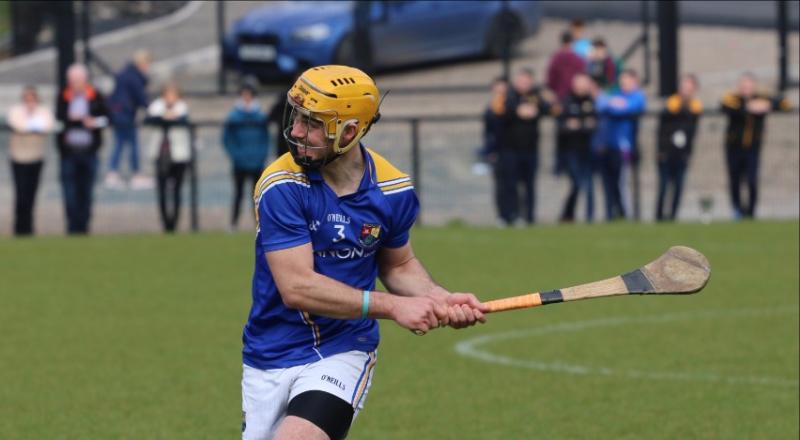 Karl Murray pictured in action for the Longford hurlers against Warwickshire in the National League Division 3B Final on Sunday last. Photo: Cóilín Duffy

Longford Senior hurlers made it third time lucky in the Allianz National Hurling League Division 3B decider as they dug deep with goals from Reuben Murray and Conor Keegan in extra-time helping them to silverware, following a two-point win over Warwickshire at a sunny Éire Óg Hurling Club in Carrickmore, Tyrone on Sunday last.

Two years ago Warwickshire captured the title with a two-point win at Ratoath; while last year Fermanagh beat Longford by the same margin in the final at Markievicz Park.

This time around, the two-point margin favoured Ray Gavin’s charges, as they captured a first 3B title since 2013, and a second overall.

Ex-Antrim star Liam Watson fired 2-13 for Warwickshire, who forced extra-time thanks to an injury-time goal from substitute Kelvin McGee from Down, on a 2-17 apiece score-line.

Just six points came from placed balls for the eventual winners - all from the stick of Cathal Mullane, with the Limerick native also firing one from play in the 27th minute.

Farrington netted the opening goal in the 20th minute, after Mullane had fed Conor Keegan, whose initial shot was blocked; then Ray O’Brien was denied by the post, before Farrington fired to the net, as Longford moved 1-5 to 0-6 ahead.

Scores from Patrick Walsh and Mullane saw Longford move four points clear, but Warwickshire scored two of the next three points, with a Watson goal levelling  the game at 1-8 apiece in the 27th minute.

Defences were on top in the closing stages of the first half with Warwickshire keeper Michael Cremin keeping a Walsh shot out. Farrington also cut through in the 33rd minute with an excellent solo run, but Cremin was also equal to his goal attempt.

Warwickshire edged a 1-10 to 1-9 interval lead, after Watson fired his sixth point, to put them ahead by the minimum at the break.

Warwickshire built up a 1-13 to 1-9 lead inside nine minutes of the restart, although their lead could have been greater but for three wides after the interval, while some good defending by Longford also kept them at bay.

Paddy Farrington's second goal came in the 45th minute, to cut the gap to the minimum, with an initial ground strike from Reuben Murray.

The lead could have been greater, but Karl Murray had a goal disallowed in the 59th minute, after his long range free finished in the Warwickshire net, but Longford were penalised for having players in the square.

Four minutes earlier Farrington cut through, and such was the magnitude of his goal shot, that the Longford subs lept for joy, but his effort was inches wide of the target.

Karl Murray was immense, with some huge performances throughout the park also from the likes of midfielders Patrick Walsh and Paul Barden, who scored six points from play between them, with all six of Longford’s starting forwards, and defender John Mulhern also on the scoresheet..

Warwickshire were reduced to 14 men for the closing stages of normal time, after Hennessy was shown a straight red card.

Longford led by five points with 90 seconds of normal time remaining, but a brace of frees from Liam Watson, and a 75th minute injury-time goal from McGee forced extra-time.

Scores were at a premium in the first period of extra-time, with Watson registering the lone score, as Warwickshire led 2-18 to 2-17 at half-time.

Three goals in 90 seconds ensured a 4-17 to 3-18 scoreline in Longford's favour three minutes after the restart, with Reuben Murray and Conor Keegan on target for Longford, and Watson getting the Warwickshire goal.