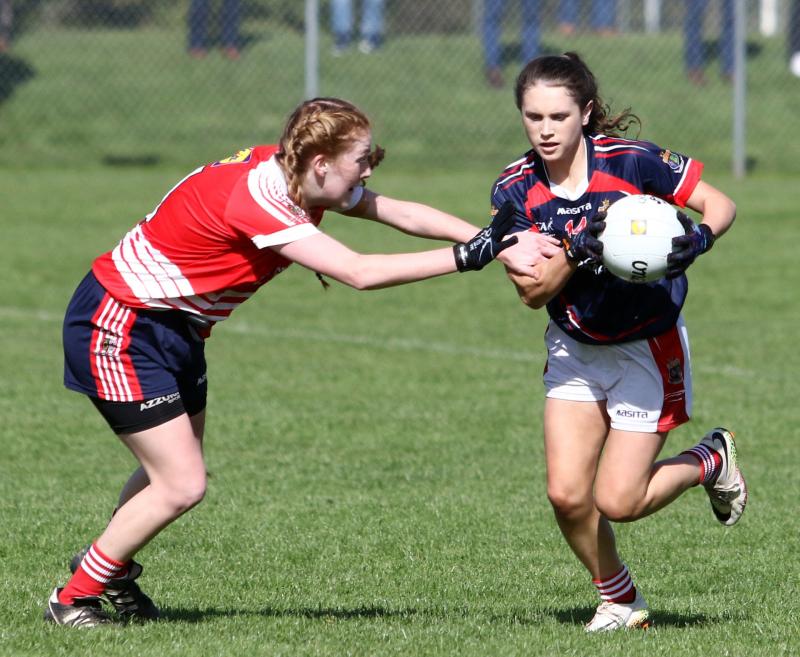 A final quarter revival wasn’t enough to get Mercy Secondary School, Ballymahon Junior girls back into contention in the All Ireland PPS ‘B’ Final against St Angela’s Ursuline Secondary School, Waterford on Sunday last.

The game was played on the fine pitch at Clane GAA grounds, Co. Kildare in warm afternoon sunshine and in truth, the Ballymahon SS girls were under severe pressure throughout large periods of this fast flowing final.

Straight from the throw-in St. Angela’s showed their intentions as they went straight down the field and scored a point.  Mercy Ballymahon then worked the ball up the field to Sarah Dillon who kicked a fine point. A good move from defence through centrefield again found Dillon who took on her marker and she drove the ball to the net.

Unfortunately, this was the only time Ballymahon SS would lead in the game.

The Waterford team were strong all over the pitch, especially at midfield and the half-forward-line.  The occasion may have affected the Mercy girls as they were second to the ball and seemed slightly off the pace at times.

Two goals in quick succession saw St. Angela’s begin to take control. They were assured and comfortable kicking some fine points from frees and open play.  A couple of missed frees didn’t help the cause for the south Longford school, although strong running from centre-half back Clodagh Dillon saw her score two points. Clodagh Lohan was also getting into the game and made a few penetrating runs as did Sarah Dillon who added another three points to keep her team in the contest.

St Angela’s goalkeeper Alisha Flynn had a fine game and saved one-on-one chances on three occasions throughout the game.  Also her lengthy kick-outs were crucial, going directly to the half-forwards to set up quick attacks as her team drove on. At half-time the Mercy girls were behind by 2-9 to 1-6 but certainly not out of it.

Joint managers Niamh Egan and Sean Bohan made some positional changes for the second half with Ciara Healy moving to the half-back line and Sarah Dillon going to midfield.  The Ballymahon SS girls actually started the second half well and points from Dillon and Clodagh Lohan gave them a badly needed boost.

Then a well-taken goal, fisted to the net by Ciara Foxe, was controversially ruled out by the referee and the umpire. It was difficult to see where any foul was committed but alas the goal was not allowed to stand. That was a cruel blow to Ballymahon SS and made worse when St Angela’s SS scored two more goals in the next few minutes.

The Mercy girls to their credit kept going and finished the game strongly.  Aisling McCormack, Sarah Dillon and Clodagh Lohan ran at the St. Angela’s defence and Ballymahon scored 2-2 in the last ten minutes.  Lohan kicked a point from a tight angle and then weaved her way through a group of defenders and finished to the net.  A fine point from defender Caoimhe Lohan was followed by a cracking goal by Dillon that closed the gap down to five.

As Sarah Dillon attempted another attack on goal she was cynically taken down.  The referee awarded the free and Dillon shot low but her effort was blocked.  The final whistle blew and so it’s heartbreak again for this team, having lost the U-16 ‘C’ All-Ireland Final last year.

Defeat is hard to take but these girls have done themselves and their school very proud and produced some fantastic performances along the way.