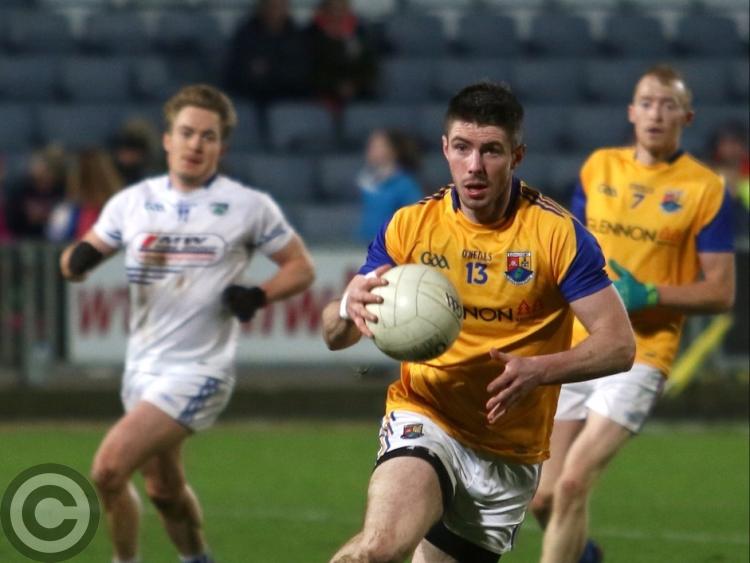 Robbie Smyth on the attack for Longford against Laois in the National Football League Division 3 game at O'Moore Park on Saturday evening last with Barry O'Farrell in the background. Photo: Syl Healy.

The tension will be high at Corrigan Park in Belfast this Sunday as Longford battle it out with fellow strugglers Antrim to determine who is relegated to Division 4 of the National Football League next season.

Due to their superior scores difference, a draw will be good enough for Longford to secure their Division 3 status but a first away win in the current league campaign is clearly the target for Denis Connerton and his under pressure players.

The defeats on the road against Louth, Tipperary and the latest setback in the showdown against Laois at O’Moore Park on Saturday evening last means that the quest to avoid the dreaded drop into the bottom division goes right down to the wire.

Four counties are deadlocked on four points apiece at the wrong end of the table with Offaly and Laois stuck in the same precarious position and the neighbouring rivals clash at O’Connor Park in Tullamore in another make or break situation.

So for the second year in succession Longford need a positive result to survive after just getting past Westmeath in the final Division 3 fixture at Glennon Brothers Pearse Park last season.

The significant difference now is that they must travel to face improving Antrim who have already beaten Sligo and Laois at Corrigan Park and the margin on both occasions was just a solitary point.

Another close encounter is probably in prospect in Belfast and after running Armagh very close at the Athletic grounds last weekend, losing by two points, Antrim will be in a fairly confident frame of mind in the  bid to get the win they need to stay up.

Backboned by a number of experienced players, most notably chief marksman CJ McGourty who is the dangerman at corner-forward, Antrim will believe that they can beat Longford and home advantage could prove to be a decisive factor.

It is a real test of nerve and character for Connerton’s charges who will hopefully be good enough to come out on top in what would be a big boost for the championship.

All games throw-in at 2pm