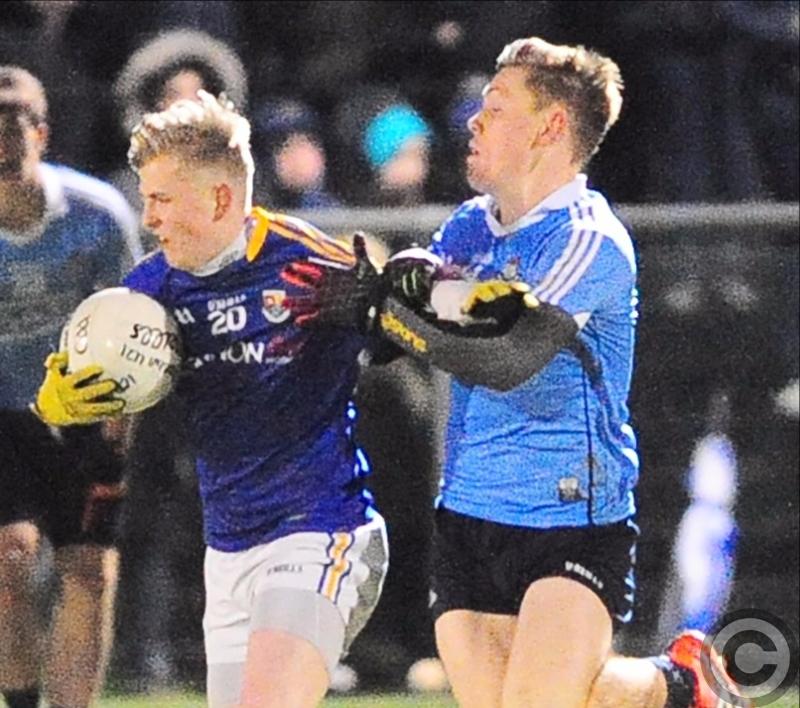 After delivering a knock out blow to score a surprise win over a highly rated Kildare side in the previous round, the courageous Longford U-21 footballers were punching above their weight again but were unable to repeat the feat against a physically stronger Dublin outfit in the Leinster semi-final at Lakepoint Park, Mullingar on Wednesday night last week.

Facing a real uphill battle when they trailed by a point at the break (0-4 to 0-3) after playing with the advantage of the strong wind in the first half, whatever hopes Longford had of springing a shock against the red-hot favourites were shattered when they conceded a couple of gift goals on the changeover.

So for the third time in the space of four years, Longford had to settle for second best against the might of Dublin at the penultimate stage of the provincial U-21 Championship and the failure of the current team to make better use of the wild weather elements proved to be a decisive factor along with the goals they gave away in the early stages of the second half.

Frank McNamee and the other members of the management team decided to stick with the usual ultra defensive approach in allowing Dublin to enjoy a lot of possession in the first half but Longford still had their chances and would have been in front at the break but for shooting six wides while another couple of efforts dropped short into the arms of the opposing keeper Evan Comerford.

Costly mistakes were punished by Con O’Callaghan who shot to the net with less than two minutes gone in the second half in capitalising on a poor kick-out and the lethal Dublin full-forward punished another blunder in the Longford defence to score a killer second goal in the 38th minute that put the issue beyond all doubt.

A member of the Cuala hurling team that won the All-Ireland Club Senior Championship title on St Patrick’s Day, rising dual star O’Callaghan inflicted the bulk of the damage in clocking up the impressive total of 2-5 (three frees) in difficult wet, windy and bitterly cold conditions at the St Loman’s GFC grounds with a large contingent of Longford supporters braving the bad weather and the ultimate disappointment of defeat

While Dublin were unquestionably the superior side and used their strength and conditioning power to establish a grip on the game, Longford still managed to earn considerable possession but some poor finishing meant that they failed to put serious  pressure on the title holders and they should have shown a greater attacking intent with the aid of the stiff wind in the first half.

The best the 5/1 outsiders could manage was three points, the first from a free converted by Rian Brady in the 16th minute following a foul on defender Kevin Sorohan, and corner-forward Brady then kicked a fine effort from play in the 23rd minute.

While David McGivney fired over a cracking long range strike approaching the half-time whistle, the midlanders were left to rue a costly missed goal chance in the 24th minute when a shot from Nigel Rabbitte was blocked down by Dublin defender Darren Byrne.

Con O’Callaghan (2) and Chris Sallier (2) shared the four points (one free) in the first half for Dublin, who were also guilty of squandering some scoring chances including a goal attempt from O’Callaghan who had a shot blocked on the line in a frantic scramble just before the break.

While Longford captain Shane Kenny started at centrefield, a recurring shoulder injury (sustained in the win over Kildare in the previous round) forced him to retire at half-time and he was replaced by Conor Berry who surprisingly did not make the first fifteen along with Jayson Matthews - two players who stood out in the Longford Senior Championship during the past couple of years.

Berry and Matthews were brought on at the start of the second half in the hope that something could be done to turn things around but after the Dublin goals materialised it was all over as a contest and there was no way back for Longford, particularly against the strong wind.

To make matter worse, dominant Dublin also fired over three points during this terrible spell for the underdogs with O’Callaghan landing a brace (free and play) while Brian Howard also shot over the bar.

Longford were reeling on the ropes in trailing by 2-7 to 0-3 with 22 minutes of the game remaining, although they did succeed in pulling a point back when David McGivney converted a free in the 41st minute following a foul on Conor Berry.

Dublin replied with a point from another prominent forward Chris Sallier (wearing the no 22 jersey) and Longford substitute Darragh Doherty was then on target in the 45th minute.

Back came the Dubs with another brace of scores in quick succession through Con O’Callaghan (a brilliantly struck long range free) and Stephen Smith (who was just on the pitch) to hold a commanding 2-10 to 0-5 lead.

Longford may have been 11 points adrift but they must be given credit for battling it out to the bitter end and their perseverance was rewarded with consolation points from David McGivney (two frees), Aidan McElligott and Dessie Reynolds.

Dublin went on to complete a four-in-a-row of Leinster U-21 football titles when they scored a comprehensive 2-14 to 0-8 win over Offaly in the provincial final at O’Moore Park, Portlaoise on Wednesday evening.