Sean McCormack points the way for success over Sligo 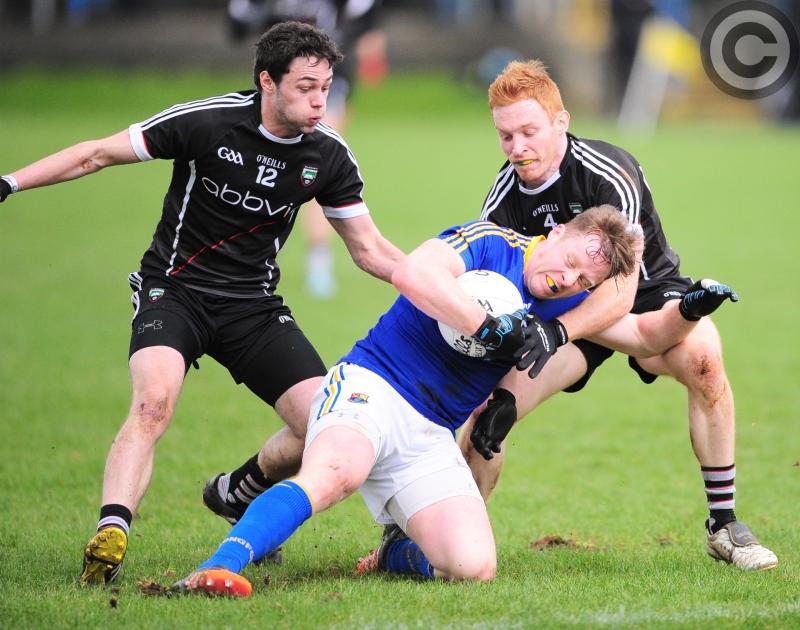 Sean McCormack, who scored seven points for Longford, has the ball firmly in his grasp in this tussle with a couple of Sligo opponents. Photo: Declan Gilmore

Badly in need of a win to ease their relegation worries in Division 3 of the National Football League, Longford recovered from the considerable setback of conceding a couple of goals in the early stages of the game to eventually come out on top.

With the home support outnumbered at Glennon Brothers Pearse Park on Sunday last as a large contingent of Sligo followers made the short trip to the midlands in the hope that their side could maintain the push for promotion, the Longford players showed a lot of character and courage to collect both valuable points in the battle to avoid the dreaded drop into Division 4.

A decisive factor in favour of Denis Connerton’s charges on this occasion was the dismissal of Sligo defender Charlie Harrison who was sent-off after receiving two yellow cards in first half stoppage time and the extra man advantage gave the home county the boost they required to establish a grip on the game and making their defensive game plan even tighter.

Longford held a slender 0-10 to 2-3 lead at the break but almost pressed the self destruct button in registering five wides in a row (four from Robbie Smyth) in the early stages of the second half before the pressure was lifted when Sean McCormack landed a terrific strike from play in the 45th minute.

Sligo were also guilty of some poor finishing in the second half in squandering several chances and while a cracking score from Adrian Marren closed the gap to the minimum of margins in the 50th minute, Longford then enjoyed a defining productive spell that yielded three points in quick succession - the first from Robbie Smyth who blasted the ball over the bar with the goals at his mercy.

Smyth capitalised on a costly mistake by the Sligo keeper Aidan Devaney and after a Longford penalty claim was then turned down for the second time in the match following a foul on James McGivney the ball broke for Sean McCormack to score his sixth point.

Barry McKeon then went close to finding the back of the net with a close range effort that went over the bar in the 53rd minute and Longford had now opened up a fairly comfortable four points gap in making it increasingly difficult for 14-man Sligo to salvage the situation.

The lead was extended when Robbie Smyth fired over a close range free in the 60th minute before Sligo were given a glimmer of hope with a point apiece from midfielder Adrian McIntyre and impressive centre-half-back Neil Ewing, the latter on target in the 65th minute.

Moments later Sean McCormack (free) fired over his seventh point to complete what was unquestionably his best performance this season and his return to form could not have come at a better time for Longford during a difficult period that saw them lose their previous three games in the National League.

Sligo battled it out to the bitter end and while their perseverance was rewarded with a point from Niall Murphy in the 70th minute, they never looked like engineering a dramatic equalising goal in the lengthy stoppage time.

Thus a second home win was achieved by Longford in the current league campaign and one more victory from their remaining two fixtures away to Laois (on Saturday next) and Antrim (Sunday April 2) will surely be good enough to consolidate their Division 3 status.

Forced to start against Sligo without injured duo John Keegan and Diarmuid Masterson, Longford had the aid of the wind in the first half and while enjoying the greater share of the possession they found themselves two points down (2-1 to 0-5) after 12 minutes.

The home side should have been awarded a penalty in the 14th minute when Michael Quinn was brought down on his way through but Tipperary referee Sean Lonergan remarkably waved play on, much to the anger of the Longford supporters.

But they refused to be rattled by this very harsh decision and four points in a row followed - the first from Sean McCormack (free), a brace from Robbie Smyth (play and free) and then Darren Gallagher was on the mark before Sligo full-forward Adrian Marren shot over the bar  from a tight angle in the 29th minute.

Having converted a ‘45’ in the 4th minute of the game, the Sligo keeper Aidan Devaney stepped up again to kick over a well struck free to level matters in the 34th minute but Longford regained the lead when James McGivney landed another excellent score in stoppage time.

Just before the half-time whistle, Charlie Harrison was sent-off for Sligo following a fracas that erupted after Michael Quinn was fouled and that gave Longford a definite edge as they went on to outscore the visitors 0-6 to 0-4 in the second half to clinch a well deserved success.