Longford U-21s will be hoping to spring shock against Dublin 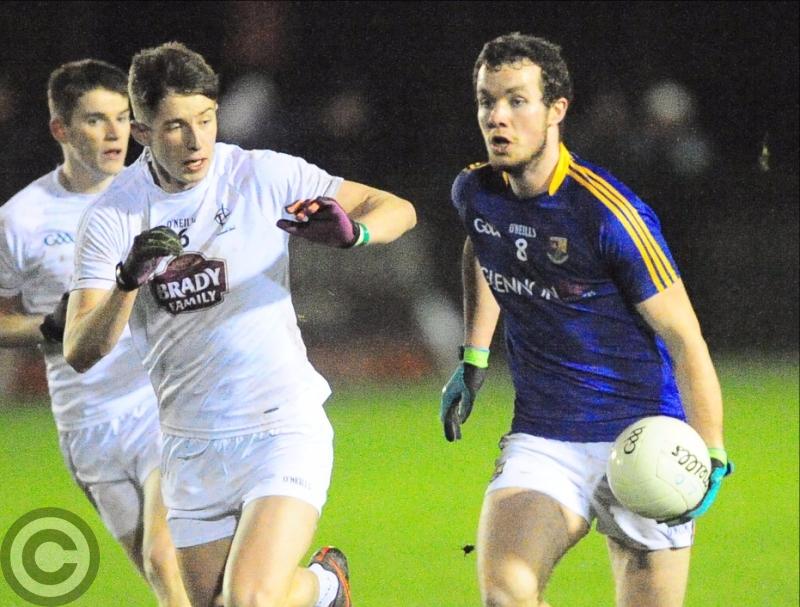 David McGivney on the ball for Longford against Kildare in the recent Leinster U-21 Football Championship quarter-final at the Hawkfield grounds, Newbridge. Photo: Declan Gilmore

After showing fierce courage to survive against Kildare in the previous round when they looked like letting victory slip from their grasp, more of the same will be required from the ‘braveheart’ Longford U-21 footballers in their quest to spring a shock against Dublin.

With the backing of big support at the St Loman’s GFC grounds, Mullingar this Wednesday night, throw-in 7.30pm, Frank McNamee’s side will be quietly confident of reaching the Leinster U-21 title decider against Offaly  but it looks like a daunting task.

Dublin are bidding to complete a four-in-a-row of provincial U-21 titles and the last time they lost a game in this championship was ironically against Longford in the 2013 quarter-final at Parnell Park when just a solitary point (1-6 to 1-5) separated the sides in the finish.

Rising Dublin dual star Con O’Callaghan, after lining-out with Cuala in the All-Ireland Club Senior Hurling Championship Final triumph against Ballyea (Clare) on St Patrick’s Day, is a serious threat in attack for the Dublin U-21 footballers who cruised to a comprehensive 2-14 to 0-6 win over Westmeath in the quarter-final clash at the St Loman’s GFC grounds.

O’Callaghan was a member of the Dublin senior squad that won the All-Ireland title last year and with other quality forwards in Colm Basquel and Aaron Byrne on the current U-21 team the Longford defence will be hard pressed to deal with the danger.

Full-forward Byrne was outstanding in the most emphatic victory over Westmeath, with the lethal Na Fianna sharpshooter clocking up a total of  2-3, and the Dublin U-21 team will be strong overall which is generally the case in this grade.

But Longford showed against Kildare they have little regard for a big reputation, based on the lilywhites winning back-to-back Leinster minor titles in 2015 and 2016, and the underdogs will go into the game against the hot favourites Dublin with the belief that they are capable of causing a major upset.

While Longford captain Shane Kenny is facing a race against time as he recovers from a  shoulder injury that forced him to retire in the first half of the quarter-final against Kildare in Newbridge, the Rathcline player feels he is fit enough to take his regular position at centrefield but that is a decision for the management team.

Key defender Ronan Sweeney (Clonguish), having had to endure a lengthy absence after the ankle injury he sustained against Meath in the Hastings Cup final at the end of January, is also on the mend and there is talk that he could possibly feature at some stage against Dublin.

Conor Berry (Abbeylara) and Jayson Matthews (Mullinalaghta St Columba’s), who surprisingly did not make the first fifteen for the game against Kildare, must be in contention to start on this occasion after both made a significant impact when brought on at the Hawkfield grounds on a wet and windy night three weeks ago.

Longford manager Frank McNamee knows only too well about the tough test that lies ahead for his side and it is all about getting the best out of his players.

“It is Dublin, again. From one tough side to another. When the draw was made we knew where we stood and we have no control over that; just take it as it comes. Dublin are a hugely talented team as well.  We will be preparing for that and preparing to compete to the best of our ability. That’s what our aim has always been and this game will be no different,” said the Fr Manning Gaels clubman  McNamee in the aftermath of the great win over Kildare.