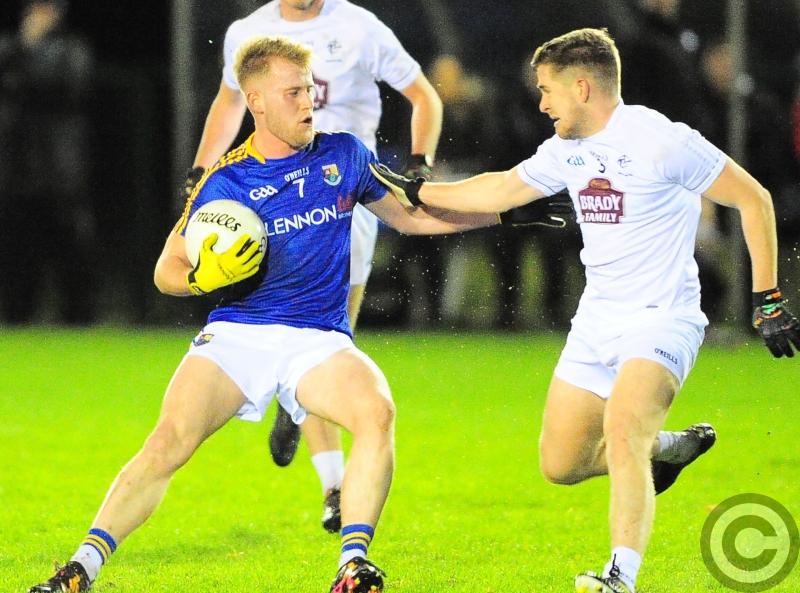 Russell Brady on the ball for Longford against Kildare in the Leinster U-21 Football Championship quarter-final in Newbridge last week. Photo: Declan Gilmore

Defending brilliantly in a most effective game plan that was executed to near perfection throughout the game, the Longford U-21 footballers showed fierce courage to knock a much fancied Kildare side out of the Leinster Championship and now meet the title favourites Dublin in the semi-final at the St Loman’s GFC grounds, Mullingar on Wednesday March 22.

Two first half goals, both scored by Nigel Rabbitte, provided the platform for this surprise result and redemption for manager Frank McNamee as the current U-21 squad made amends for the bitter disappointment of falling at the first hurdle away to Wexford last year.

Longford were on the road again in heading to the Hawkfield Centre of Excellence on the outskirts of Newbridge on a wet and windy Wednesday night and while they held a comfortable eight points lead at the break, 2-3 to 0-1, Kildare came storming back with the advantage of the wild elements in the second half to set up a tense and exciting finish.

Both sides were guilty of some poor finishing in the first half, wind assisted Longford kicking seven wides as compared to four for Kildare, and the visitors suffered a severe setback when midfielder Shane Kenny was forced to retire with what appeared to be a serious shoulder injury in the 21st minute.

With key defender Ronan Sweeney already ruled out with an ankle injury, Longford are now facing the prospect of facing Dublin without their captain Kenny but for the moment the very committed U-21 squad can savour a rare win over Kildare.

The record against the lilywhites in recent years was not good, most notably the defeats in both the Leinster U-21 Final (2013) and Leinster Minor Final (2015), but that all changed in Newbridge last week as a very sweet victory was achieved.

While Nigel Rabbitte was the matchwinner by virtue of getting the crucial goals, the contribution of full-back Conor Farrell in the heart of a solid defence was immense and he deserves a lot of credit for the major role he played in keeping the opposing attack at bay.

Much was expected of Kildare on the back of winning the Leinster Minor titles in 2015 and 2016 and while they scored nine points in a row in the second half to hit the front by the 50th minute they lacked the bottle to get across the line in the face of fierce resistance from a gutsy Longford team with a couple of cracking points from substitute Conor Berry (replacing the unfortunate Shane Kenny) clinching a famous win.

Rian Brady, Shane Kenny and David McGivney (free) accounted for the Longford points in the first half with the solitary Kildare score coming from a close range free converted by Paddy Woodgate in the 23rd minute.

But it was the goals that paved the way for this superb success and Nigel Rabbitte, after linking up with Rian Brady, found the back of the net in the 6th minute when his low shot deflected in off the post.

Rabbitte rattled Kildare again in the 12th minute to grab his second goal, put through after receiving the perfect pass from Daryl Carrigy, and Longford were causing a lot of problems for the home county in launching quick counter-attacks after soaking up considerable pressure.

But benefiting from some very harsh decisions made by Louth referee Stephen Murphy on the changeover, much to the anger of the Longford supporters who braved the bad weather, Kildare corner-forward Paddy Woodgate fired over five points in a row between the 32nd and 40th minutes.

That was really putting it up to Longford and four more Kildare points followed through wing back Stephen Comerford (their first score from play in the 41st minute), a brace from substitute Cian Costigan (free and play) before another replacement Jack Robinson shot over the bar to leave the lilywhites 0-10 to 2-3 ahead.

It was not looking good for Longford at this late stage against the wind but with Conor Berry about to make a big impact the game gradually changed in favour of the underdogs.

The physically strong Berry burst his way through for the equalising point in the 51st minute - the first score of the second half for the visitors - and another great score from Berry in the 56th minute put Longford back in front to leave Kildare in a state of panic.

Losing senior regular forward Ben McCormack, forced to retire injured at half-time, proved to be a big blow for the Kildare U-21s when it came to the crunch and they generally lacked penetration in attack with seven of their ten scores coming from frees.

Longford were in no mood to let a big scalp slip from their grasp and the tremendous achievement was complete when substitute Jayson Matthews shot over the bar entering stoppage time.

Cian Brady was sent-off for a  black  card offence just before the final whistle was blown but Longford had already done enough to book their place in the last four against the reigning Leinster U-21 champions Dublin.