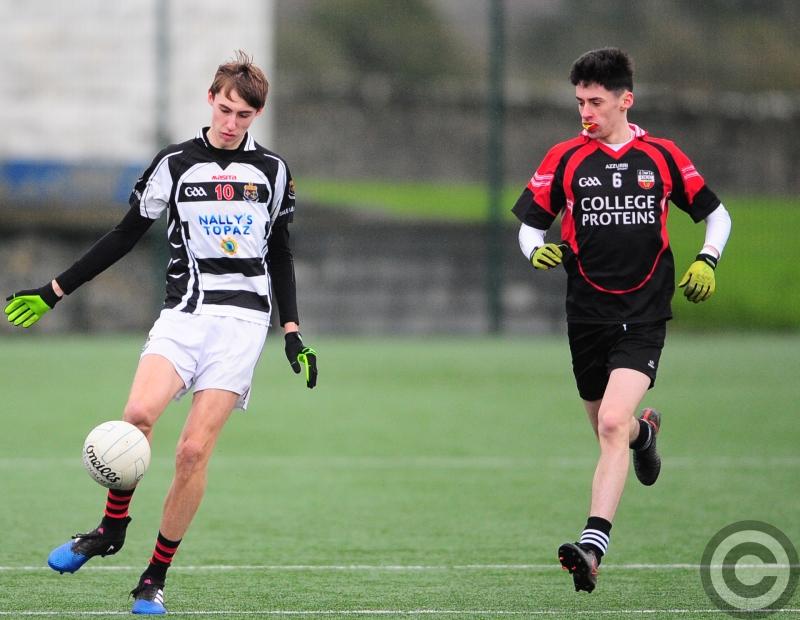 There was no joy for Mercy Secondary School, Ballymahon U-16 footballers who lost out to Meath opponents O’Carolan College, Nobber in the North Leinster Junior ‘C’ Final played on the astroturf pitch at the St Loman’s GFC grounds, Mullingar on Tuesday last week.

There was never much between the sides but when O’Carolan College got their fourth goal in the 41st minute they were able to kick on and seal the success.  Goals were the difference between the two sides in the finish and Ballymahon SS will be disappointed with the manner in which they conceded those crucial scores.

The first one was scored in the 3rd minute when Nobber full-forward Brian McCormack, who was a constant threat throughout this entertaining game, played the ball into Niall Bennett and he hit the target.

Ballymahon SS hit back when a low shot from Luke Gunning ended up in the back of the net. But poor defending allowed Nobber get their second goal in the 16th minute when McCormack made no mistake with a powerful shot.

A free from Oran Kenny was then followed up by another goal from Luke Gunning to give Ballymahon SS a one point lead by the 20th minute but it only lasted two minutes. A shot from Niall Bennett was parried by Ballymahon SS keeper Bryn Peters and Brian McCormack pounced to score the third goal for O’Carolan College.

Oran Kenny got a point to cut the gap to one before Killian Price hit over a lovely score to restore a two point advantage for Nobber. Just before the break a point from Luke Gunning (free) saw Ballymahon SS trail by just the minimum of margins, 3-2 to 2-4.

The Meath school made a fine start to the second half and points from McCormack (free) and a wonderful strike from Price saw them extend their advantage.  But then Ballymahon SS began to gain control in a dominant period to turn that three point deficit into a one point lead.

Oran Kenny shot over the bar and then three more points in a row, all from Dylan Farrell (one free), edged the south Longford school ahead by the 39th minute.  But instead of building on that lead Ballymahon SS made silly mistakes and allowed Nobber back into the game.

O’Carolan College grabbed a fourth goal in the 41st minute to take the lead again when Price’s effort was saved by opposing keeper Peters but the loose ball fell to Ben Blakemore and he finished to the net. McCormack then hit over two fine scores, followed by an excellent Blakemore point, to put Nobber five points ahead by the 48th minute.

A point apiece were then exchanged between Oran Kenny and Pauric Dillon and after Dylan Farrell (free) was on target again in the 53rd minute, a powerful shot from Kian Gilmore hit the crossbar. Ballymahon SS needed a goal to get back into the game but Nobber defended well to make sure that would not happen.

O’Carolan College kept the scoreboard ticking with Blackmore and Price firing over points to put six between the sides with two minutes of normal time remaining before Kian Gilmore got a consolation point for Ballymahon SS in stoppage time.