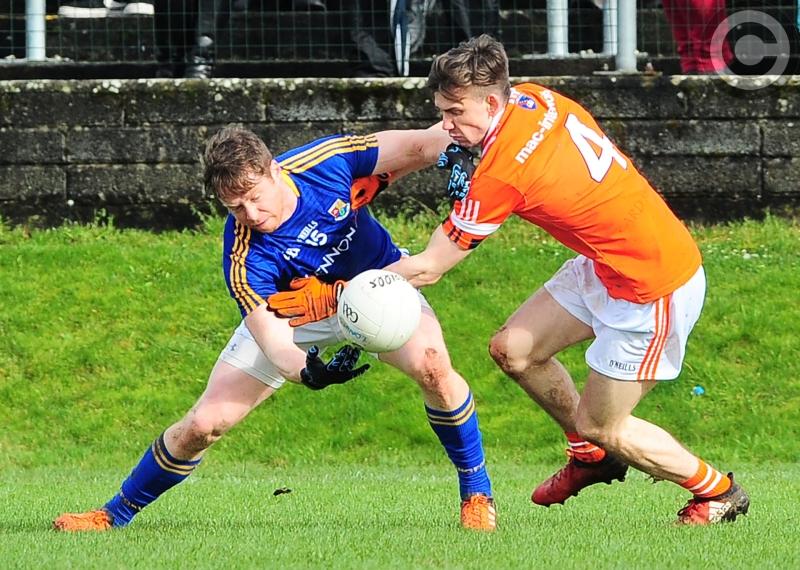 In a dramatic match that was almost postponed due to the bad weather, Armagh held out for a narrow win over Longford in this action-packed National Football League Division 3 clash at Glennon Brothers Pearse Park on Sunday last.

Even though Longford lost Donal McElligott (53 mins), Robbie Smyth (55 mins) and substitute Larry Moran (69 mins) who were all branded with black cards and were reduced to 14 players when Dermot Brady was sent-off for a second yellow card in the 65th minute, they still could have avoided defeat after staging a great comeback in a very exciting finish.

Eleven points down (2-7 to 0-2) approaching the half-time whistle with Jamie Clarke and Oisin O’Neill (a real gift) getting the Armagh goals, it was looking very bleak for the home county but they were thrown a lifeline when Liam Connerton planted the ball in the back of the net in the 34th minute.

A brace of points quickly followed from Dermot Brady (operating a rovlng role throughout the game) and Robbie Smyth (free) to trail by 2-7 to 1-4 at the break but Armagh struck a shattering blow to score a third goal with just 30 seconds gone on the changeover.

Stefan Campbell shot to the net from close range to leave Longford fighting a real uphill battle, even with the advantage of the stiff wind, and they then registered three costly wides in a row before they eventually scored again in the 41st minute when Michael Quinn landed a point.

Longford were guilty of some very poor finishing throughout the match (11 wides) and after Robbie Smyth converted a free in the 42nd minute,  Liam Connerton then wasted a glorious goal chance moments later when he directed his shot narrowly wide after a bad mistake by the opposing keeper who dropped the ball.

Michael Quinn (set up by Connerton) then flicked the ball wide when another goal was there for the taking in the 49th minute but the pressure was eased on shaky Armagh when Jamie Clarke shot over the bar in the 54th minute.

Substitute Diarmuid Masterson, back after injury to make his first appearance in the current National League campaign, was just on the pitch when he kicked over a point and Michael Quinn went close with a low drive goal attempt that was well saved by the Armagh netminder Blaine Hughes.

Hughes then made a terrible blunder moments later in gifting James McGivney a goal in the 60th minute, letting a harmless looking shot slip through his legs as the gap was reduced to just four points, but Armagh consolidated their grip on the game with a couple of crucial scores from frees converted by Stefan Campbell.

When Dermot Brady was dismissed that appeared to be the end for Longford but they showed fierce character in the hope of salvaging the situation and after Michael Quinn converted a ‘45, a cracking goal from Larry Moran in the 68th minute (created by James McGivney) left Armagh sweating it out in search of their first victory in the league this season.

A point from Barry McKeon left just the minimum of margins (3-10 to 3-9) separating the sides and with five minutes of additional time still to be played at least a draw was remarkably within reach for revitalised Longford.

But Armagh regained their composure to stick it out and clinched a vital victory when Rory Grugan fired over a free close to the final whistle.

It was hard luck on Longford after all the things that went wrong in this amazing encounter and Denis Connerton must now lift his players for another tough task away to Tipperary in Thurles on Sunday next.

Most of the damage in the defeat against Armagh was done in the first half as Longford played very poorly before producing a late surge to end up trailing by  six points at the break after having to wait until the 17th minute for their opening score with Robbie Smyth shooting over the bar.

Minus the services of the injured Darren Gallagher (hamstring), along with U-21 players Dessie Reynolds and David McGivney, Longford were slow to settle as wind assisted Armagh raced into a comfortable 1-4 to 0-0 lead with Jamie Clarke getting the goal in the 11th minute.

The points were registered by Rory Grugan (2), Andrew Murnin and Stefan Campbell as the visitors (without the injured Ethan Rafferty and the suspended Aidan Forker) consolidated a firm grip on the game, much to the delight of their vociferous supporters who comprised at least half of the attendance.

Robbie Smyth got the second score for Longford direct from a well struck sideline kick in the 18th minute but back came Armagh to add another 1-3 to their tally with Oisin O’Neill getting the touch for a very sloppy goal in the 29th minute when the danger should have been cleared.

Having said that, the last Armagh point in the first half should have been a goal as Stefan Campbell blasted the ball over the bar from a few yards out following another excellent move.

Longford launched an immediate counter-attack with Donal McElligott and Michael Quinn linking up to put Liam Connerton racing through for a badly needed goal and while another 2-5 was scored in the second half by the home side it was not good enough to prevent a second successive setback in the Division 3 minefield.

On a final note, the poor standard of refereeing on Sunday last left a lot to be desired with the Galway official James Molloy branding several yellow cards to both teams before he hit Longford really hard with three black cards and left them with 14 players on the pitch after Dermot Brady was dismissed with five minutes of normal time remaining.