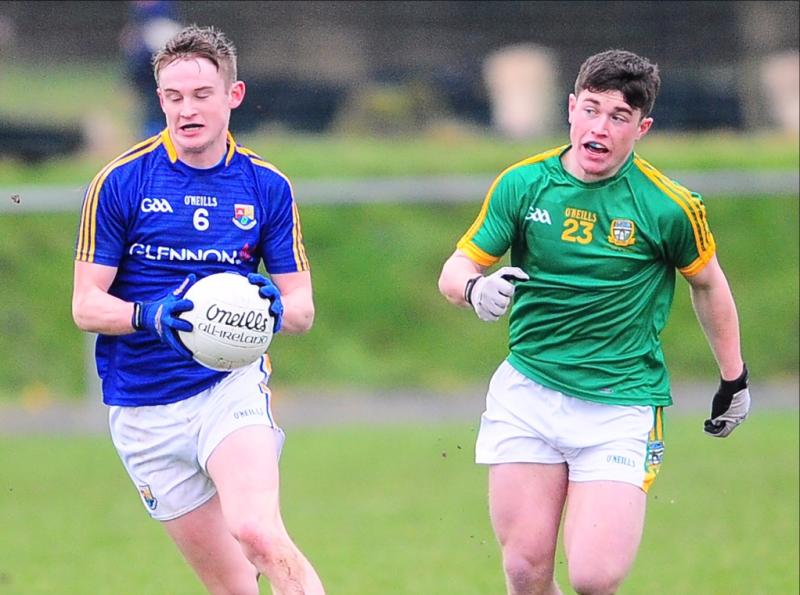 Dessie Reynolds pictured in action for the Longford U-21s against Meath in the Hastings Cup Final at Lynch Park, Abbeylara at the end of January.

Since the draw for the Leinster Under 21 Championship was made four months ago Longford manager Frank McNamee has been preparing for his side’s opening game away to Kildare with the eagerly awaited quarter-final clash taking place at the Hawkfield GAA grounds, Newbridge this Wednesday night, throw-in 7.30pm.

The Hastings Cup competition was used as the build-up to the Leinster Championship and Longford reached the final of that competition. Along with several challenge matches and training sessions, the time has arrived for McNamee and Longford as they travel to Newbridge to take on Kildare.

“We have been counting down to the game since last October after the draw was made,” said McNamee. “I’m looking forward to it. The most important thing is to get the preparation right and after that it’s up to the players. It’s where you want to be as a manager and hopefully things will go according to plan.”

While the preparation has gone well, Longford go into the game without full-back Ronan Sweeney who got injured in the Hastings Cup Final.

“We are okay apart from Ronan Sweeney who has a long term injury. We had plenty of time between the Hastings Cup Final and now to prepare for being without Ronan but he will be a huge loss,” lamented McNamee.

McNamee is under no illusions about the difficult game his side are facing, a championship game away to Kildare.

“The fact is that they have won the last two Leinster Minor Championship titles and have a huge pool of talent to draw from. We are well aware about their success at underage level and Kildare continue to produce a lot of very good athletic footballers. A third of their U-21 team are on the senior panel so we are under no illusions about the tough task we are facing.  Kildare are strong contenders to win the Leinster U-21 title so we know we are up against it.”

Several  of the current Longford panel have faced Kildare in minor championship ties in the past and others have gained big match experience while playing for school and club. The Longford manager said: “They have a lot of experience with their clubs and varying degrees of experience in pressure games. The core element of the group would have been involved with James Carroll and Cnoc Mhuire on their successful runs for the school. They would have all represented Longford at some stage in recent years. The players know each other so well and are tight as a unit which is all very important.”

Longford face a daunting task against Kildare but McNamee is going into the game quietly confident.

“All the training and preparation has been done and it’s now up to his players to go out and show what they are capable of. All we can do is prepare as well as we can for the game. We will be going there to be as competitive as we possibly can. I’m very happy with the attitude and the approach the group have had. We know we are going into a difficult situation but it’s  a huge opportunity for the players. It’s great to be preparing for the championship and for them to be representing their county,” concluded the optimistic McNamee.