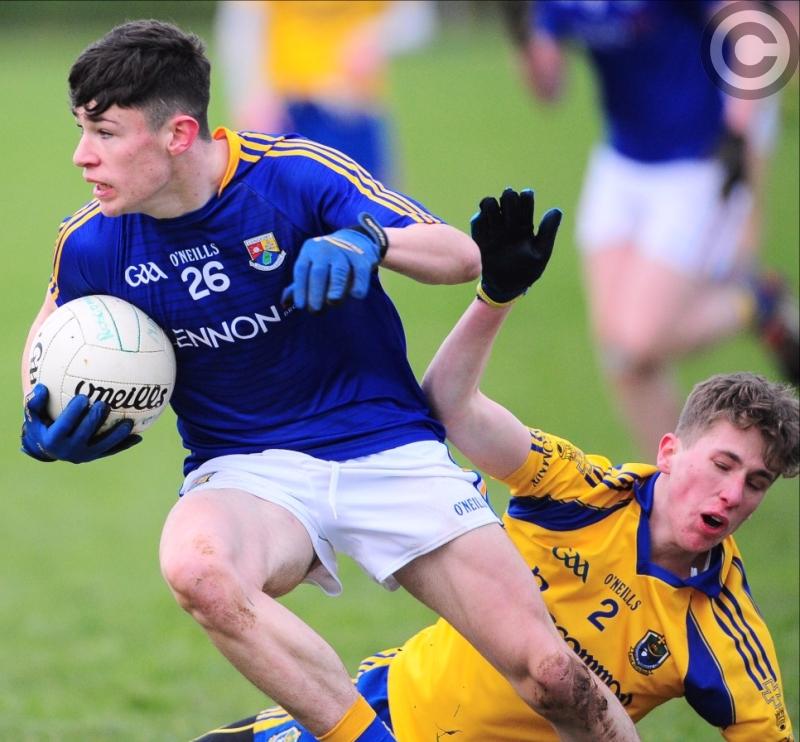 Dylan Farrell pictured in action for the Longford Minors against Roscommon in the Connacht League game at the Kilglass GAA grounds on Saturday last. Photo: Declan Gilmore

Longford minors commenced their competitive action for the year ahead as they suffered a comprehensive defeat against Roscommon in the Connacht League game at the Kilglass GAA grounds on Saturday last.

New Longford minor manager Karl Dermody fielded a strong side but they struggled to compete with a physically stronger Roscommon team.

Longford did have chances early on to take the lead and controlled the game in periods during the first half but were guilty of kicking wides and giving away possession to Roscommon. Longford kicked six wides before they opened their account when Ciaran McKeon scored a goal in the 16th minute.

Roscommon had clocked up seven points in a row during that period, five of which came from impressive corner-forward Ronan Dowd before McKeon finished a free from Aidan McGuire to the net for the Longford goal.

Colmcille's McKeon hit Longford's only point in the first half in the 29th minute as Roscommon held a commanding 0-11 to 1-1 lead at the break.

The second half saw an improved effort from Longford as they pressed hard and were rewarded with  points from Aidan McGuire, Robbie O'Connell and Ciaran McKeon, the latter a cracking effort from the outside of the boot, but they failed to break Roscommon down for a badly needed second goal.

Longford would have outscored their neighbours in the second half only for a harsh penalty decision which was duly converted by centre-half-forward Sea Henry  in the 50th minute. The goal put the issue beyond any doubt as Roscommon ran out comfortable winners in the finish.

On a positive note, the Longford management were allowed to try out the majority of the squad which is the real purpose of these early season competitions as they have little say in how the championship will play out. For example, when the talented Longford minor side of 2015 reached the Leinster Championship Final they did not win a single game in the Connacht or Leinster league.

Longford begin their Leinster Minor League campaign next Saturday away to Offaly before returning to Connacht league action the following week in Sligo.