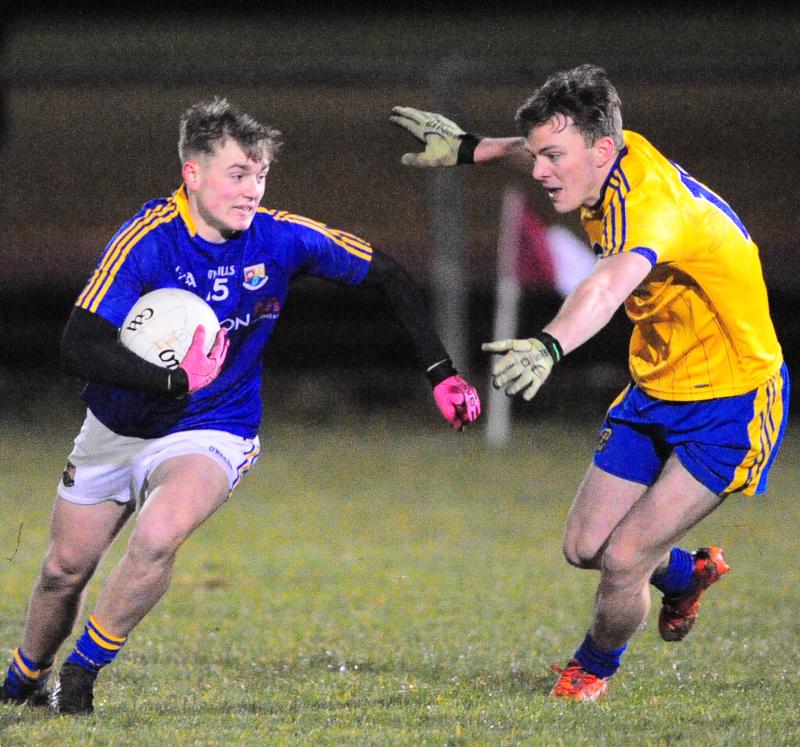 Longford U-21s booked their place in the Hastings Cup semi-final against Leitrim after they came from behind to defeat neighbours Roscommon in their final Group 2 game played at McGann Park, Kenagh on Friday night.

Longford will have the benefit of home advantage for that penultimate round tie next weekend while the second semi-final will see Meath take on Cavan.

Frank McNamee’s side were sluggish in the opening quarter of this game as Roscommon opened up a five point lead, 1-2 to nil. The Rossies had lost their previous two games in this competition but played good football in the opening exchanges.

In those opening 15 minutes Longford’s Peter Lynn and Roscommon’s Gearoid Keenan were black carded. Keenan was a huge loss for his side.

Longford first score came in the 16th minute when the excellent Shane Kenny found the back of the net.

Roscommon replied with a point before Longford got a stranglehold of proceedings and three points in a row, per Rian Brady and Shane Kenny (2), levelled matters before Darragh Doherty put them ahead for the first time in the game in the 28th minute, 1-4 to 1-3.

Longford got their second goal in the 29th minute; Kenny with a perfect ball in and who else but Aidan McElligott got a flick to it to raise the green flag. A neat Joe Kelly point gave Longford a 2-5 to 1-3 lead going in at the break.

Roscommon’s Hubert Darcy grabbed the opening score of the concluding half before the Brady brothers, Cian and Russell, replied with points for Longford as they extended their lead to six points in the 36th minute, 2-7 to 1-4.

Roscommon kept at them but Longford hit a dominant spell midway through the second half and got some good scores.

Roscommon knew a goal would bring them into the game but Longford’s defence and in particular keeper Micheál Hughes thwarted them on a number of occasions as Longford advanced to the last four of the Hastings Cup.