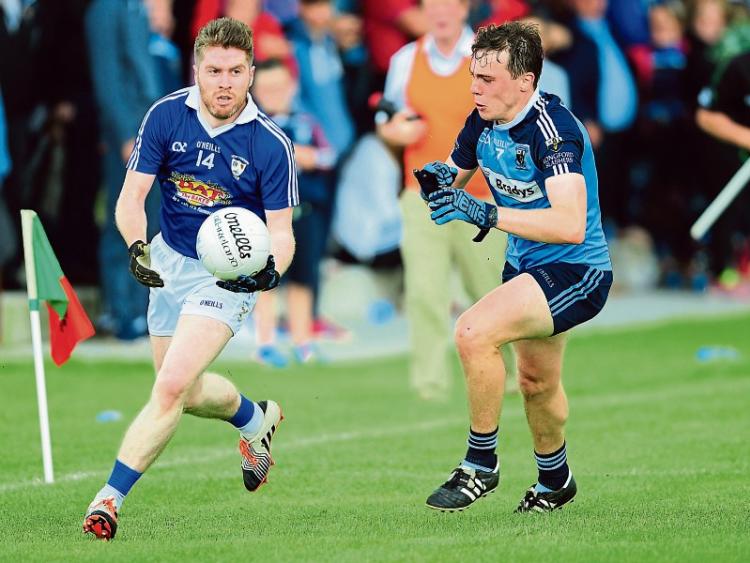 St Mary’s Granard have it all to do if they are to remain in the Senior Football Championship following a poor display against Longford Slashers in the first round game played at Devine Park on Sunday last.

The Granard side were terrible in front of the posts, kicking 15 wides throughout the game, and sorely missed the services of the injured Liam Sullivan. They did make a few changes in the second half but there was no inspiring substitutions that could change the game.

Slashers also missed a few chances but they got the scores when needed with wing-back Brian Walsh firing over three fine points. Barry Gilleran and Dermot Brady marshalled the defence well; the midfield pairing of Michael Brady and Andrew Dalton dominated for large spells while the forward line took their scores well with Paul Kelly and Niall Mulligan the playmakers.

A pointed free from Gilleran and a neat Sean Clarke point gave Slashers an early lead. After kicking a number of wides, Granard finally registered their first point in the 11th minute through Derek Sheridan. Then a lovely move involving Vinny Nally and Conor Mallon ended with Darren Gallagher pointing to level the game in the 13th minute.

A couple of frees from the boot of Barry Gilleran restored Slashers two point lead by the 21st minute. After going 16 minutes without a score, Granard got a much needed point in the 29th minute to cut the gap to one going in at the break; 0-4 to 0-3.

Granard had chances early in the second half to level but they were wasteful. Down the other end there was no such problem for Slashers as they opened up a four point lead by the 34th minute with a fantastic point from Paul Kelly and a neat Brian Walsh score.

Niall Sheridan’s side needed scores and full-back Thomas Gallagher got up into the forward line but his goalbound shot was saved by Slashers netminder Colm Farrell. There was five between the sides in the 47th minute when Robbie Clarke twisted and turned before firing the over the bar.

It could have got even better for Slashers in the 49th minute but Granard keeper Eoghan Mallon did very well to deny Niall Mulligan’s fine effort for a long-range point.

Granard’s first point in the second half didn’t come until the 50th minute, a free from the boot of Liam O’Rourke. Then a lovely move involving O’Rourke saw Thomas Gallagher cut the gap to three two minutes later.

Both sides squandered chances to add to their scores and after a few injuries the next score didn’t come until the 59th minute; a wonderful point from Brian Walsh that put Slashers ahead by four. Darren Gallagher replied with a pointed free for Granard before Walsh was on target again with another excellent point for Eugene McCormack’s side.

With the few injuries in the second half, there was still time for the teams to add to their tally. Granard needed a goal but just didn’t look like they would even get a point as Slashers defended well and tried to push them out.

Robbie Clarke extended his side’s lead to five points in stoppage time. Granard got two late scores through Bernard Clyne and an excellent O’Rourke point from a tight angle but it was too little too late for St Mary’s.

Slashers now look ahead to a clash against Killoe Emmet Og next weekend while Granard know they cannot afford to lose against Clonguish on Friday evening in order to keep alive their hopes of reaching the quarter-finals.