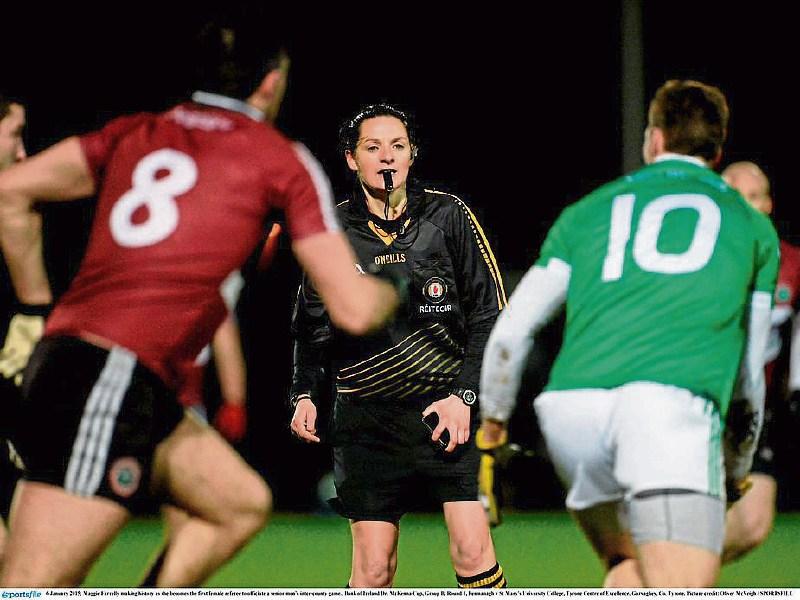 Longford’s drive to recruit up to twenty new referees has gathered momentum in recent weeks and this Friday, January 15, is the closing date for clubs to submit the names of personnel interested in taking up the whistle.

At County Board meetings and annual Convention recently, clubs were asked to prioritise the search for new referees and supply at least one new reiteoir for the 2016 season.

Chairperson of the Referees Administration Committee Joe O’Brien, in his report to convention, highlighted that there are only 31 trained and qualified referees in the county but most of the time, there are just 25 or 26 officials to work with.

He added, “To run a smooth and effective refereeing service it would require 45 referees.”

Putting pressure on clubs to find new referees, Mr O’Brien said, “The time for lip service from clubs is over and they must make a serious effort to provide at least one new and young referee.”

Staying on the topic of referees, Cavan’s Maggie Farrelly made GAA history last Wednesday by becoming the first female official to referee a senior men’s inter-county game - the clash of Fermanagh and St Mary’s in the Bank of Ireland Dr McKenna Cup.

In 2015, she became the first female to take charge of an inter-county game when she officiated at the Ulster minor Championship tie between Fermanagh and Antrim at Brewster Park.

A member of the Laragh United club, Maggie took up refereeing in 2008 - and she has revealed that she was approached to take up the whistle by her club chairperson Thomas McKenna in response to a shortage and recruitment drive similar to the one Longford is currently embarking upon.

Maggie joined the Ulster GAA Referee Academy in 2011 and the following year she refereed the Cavan All-County League decider.

In 2014, she refereed the county U-21 final, the All-Ireland Ladies’ senior final, and was named Ulster GAA Referee of the Year. Alongside taking charge of an Ulster MFC encounter in 2015, she was also fourth official at the Kerry-Dublin league match in Croke Park.

Maggie says she derives a lot of enjoyment out of refereeing. “The opportunity is there for everyone to become involved and become a referee. You will be trained up. It is not based on gender. You are appointed and out there to do your job based on your knowledge of the rules. Everyone reacts differently to you but everything has been positive so far.”

Her progress through the refereeing ranks has been steady and while it may not be too long before we see Maggie taking charge of a NFL, Ulster SFC or All-Ireland qualifier game, she is refusing to get carried away.

“Appointments are always made on merit so you just have to be patient and wait your turn as such, to be given your chance to officiate.

“I am just Maggie Farrelly and I am just a referee. I don’t expect red carpets rolled out for me. I am treated like everybody else. I don’t have high expectations of how I should be treated because I am no different to anybody else. Regardless of gender, I have the same fitness tests to do, the same written tests to do. I get the same support as any other referee.”