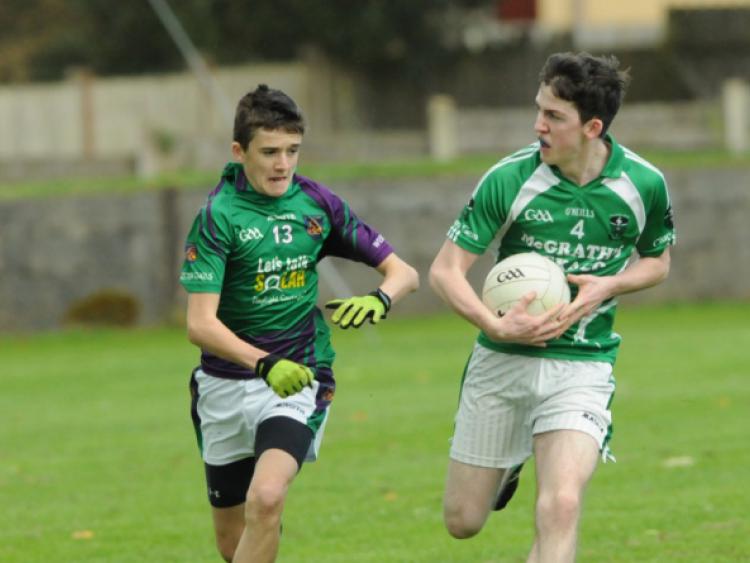 Three second half goals from Christopher Gordon played a big part in getting Clonguish Og through to the Minor Football Championship Final in their convincing win over Western Gaels (Rathcline/Grattans) at Michael Fay Park on Saturday last.

Three second half goals from Christopher Gordon played a big part in getting Clonguish Og through to the Minor Football Championship Final in their convincing win over Western Gaels (Rathcline/Grattans) at Michael Fay Park on Saturday last.

Gordon’s first goal came in the 39th minute and it was just after Western Gaels (without the injured county minor captain Shane Kenny) had a goal chance of their own; John Hand went bearing down on goal but hit the sidenetting with a low shot. Gordon’s second goal in the 48th minute put his side six points ahead and in control and they were able to see out the rest of the game in considerable comfort.

Western Gaels started well and hit over the first three scores; John Hand with a point from play and two Daniel Howlin frees. Clonguish Og had chances but the Western Gaels defence forced them into hitting a number of wides.

Clonguish’s first score came in the 18th minute when a high ball in from Colin Clarke was touched to the net by Michael Corcoran for a crucial goal. John Hand and Colin Farrell (free) traded points before another Farrell free put Clonguish ahead for the first time in the 26th minute.

Right before the break a fine point from Peter Lynn drew the sides level, 0-5 to 1-2. A John Hand free in the 35th minute gave Western Gaels the lead again but it was the last time they were to be in front in the game.

Another Colin Farrell free levelled matters in the 37th minute before John Hand struck the sidenetting when through for a goal for Western Gaels. Christopher Gordon then made no mistake in getting his first goal for Clonguish.

Two Western Gaels points either side of the Gordon goal cut the gap to two but Clonguish pulled away in the final quarter.

Christopher Gordon fired over his second point in the 46th minute and two minutes later he found the back of the net again with an excellent effort.

A neat Alan Gregg point minutes later put seven between the sides and there was no way back for Western Gaels who were struggling to gain possession.

The excellent Christopher Gordon scored his third goal in the 54th minute after receiving a pass from Michael Corcoran and moments later Corcoran hit over a point.

Five minutes from time, Corcoran was on the scoresheet again when he jumped well to catch the ball before turning and shooting over the bar to extend his side’s lead to 12 points.

The last score of the game came in stoppage time when Western Gaels midfielder Kevin Sorohan got a point - his side’s first score since the 45th minute.

Clonguish can now look forward to the county minor final where they will meet either defending champions Northern Gaels or Longford Slashers.