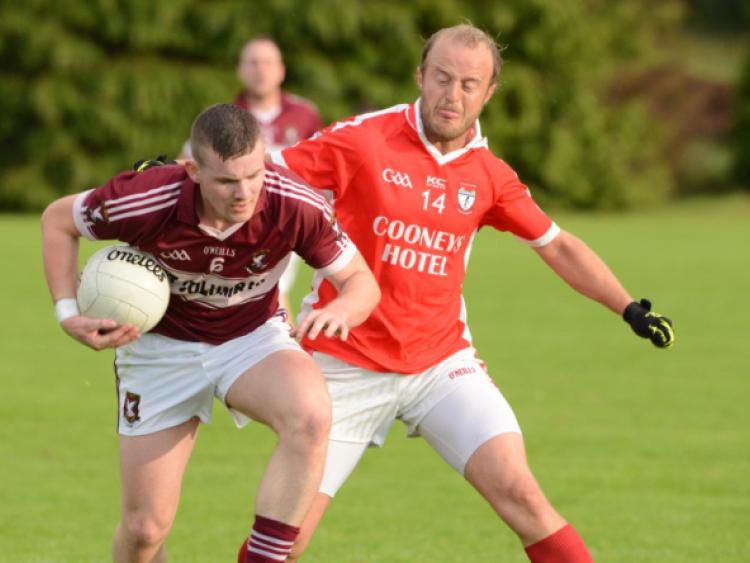 It took Mullinalaghta quite some time to gain control of the Senior Football Championship Round 2 clash against Ballymahon at the Monaduff grounds, Drumlish on Saturday evening last but they gradually pulled away to win with considerable ease.

It took Mullinalaghta quite some time to gain control of the Senior Football Championship Round 2 clash against Ballymahon at the Monaduff grounds, Drumlish on Saturday evening last but they gradually pulled away to win with considerable ease.

The wide margin of 12 points separated the sides in the finish as Gerry Lynn succeeded in guiding St. Columba’s into the quarter-finals with a game to spare in the group stage of the Connolly Cup and they were never in any real danger of slipping up against a poor Ballymahon outfit.

Attacking defenders James McGivney and Shane Mulligan were particularly prominent in providing the platform for this emphatic victory while young Jayson Matthews (0-2) was a constant threat in the full-forward-line with chief marksman David McGivney also much to the fore up front - firing over a total of seven points (six frees).

When Shane Mulligan surged forward on a penetrating run to fire home a cracking goal in the 6th minute, Ballymahon were behind by 1-2 to 0-0 with the early St. Columba’s points coming from David McGivney (free) and Jayson Matthews (a terrific strike).

But Ballymahon battled back in determined fashion and after Kyle Fitzmaurice kicked over their opening point in the 7th minute, further scores followed from Kevin Diffley, Edwin Nally and a Colm Flynn free in stoppage time to keep their slim hopes alive.

Mullinalaghta still held a comfortable 1-7 to 0-4 lead at the break with David McGivney (two frees), Aidan McElligott (a great individual effort), Donal McElligott and James McGivney (a mighty long range strike) accounting for the other scores in the first half but they suffered a setback to concede a goal with two minutes gone on the changeover.

Mark Connor directed the ball into the path of Edwin Nally whose flick found the back of the net and then Connor had a point-blank shot well saved by St. Columba’s keeper Patrick Rogers as Ballymahon (managed by Alan Hudson) almost scored a second goal that would have left the sides all square.

Rogers then fumbled the ball close to the line but recovered to clear the danger and that was as good as it got for Ballymahon as David McGivney kicked a delightful point from play in the 37th minute to ease the pressure on Mullinalaghta.

County minor McGivney then converted another couple of frees before the killer blow was struck in the 46th minute when a centre from Jayson Matthews into the heart of the goalmouth was finished to the net by Aidan McElligott.

Soon after Colm Flynn fired over a difficult Ballymahon free near the sideline but Mullinalaghta quickly regained the upper hand with a point from a David McGivney free along with a good goal in the 53rd minute from Gary Rogers, who finished off a fine move that also involved Jayson Matthews and Aidan McElligott.

Matthews was on target in the 58th minute for Mullinalaghta’s final score and they could afford the luxury of kicking a total of ten wides during the course of the game as compared to just three for Ballymahon, who grabbed a late consolation point when Kevin Diffley blasted the ball over the bar when a goal was there for the taking.