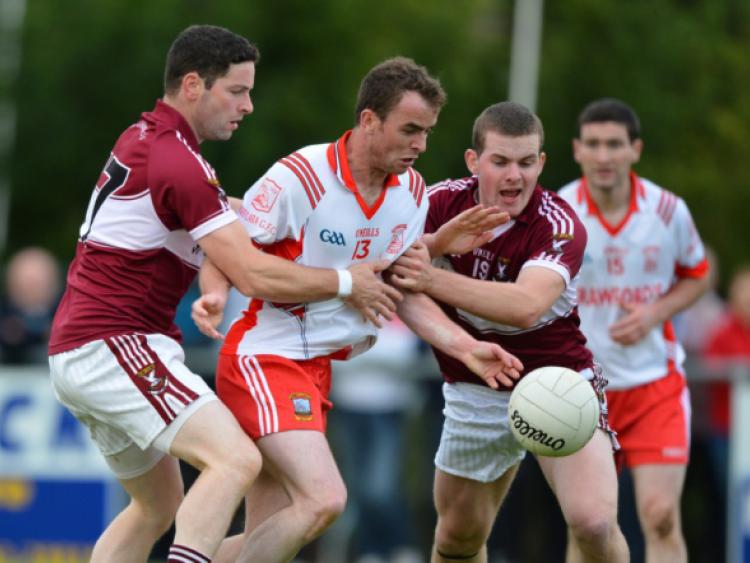 In what turned out to be a dress rehearsal for their quarter-final clash nothing could separate neighbours Mullinalaghta and Abbeylara as they played out a draw in the Senior Championship Round 3 game at Maguire Park in Ballinalee on Sunday evening last.

In what turned out to be a dress rehearsal for their quarter-final clash nothing could separate neighbours Mullinalaghta and Abbeylara as they played out a draw in the Senior Championship Round 3 game at Maguire Park in Ballinalee on Sunday evening last.

St. Columba’s made the better start and hit over three unanswered points in the opening six minutes. Abbeylara responded very well and levelled the game in the 8th minute; Brian Smyth played the ball to Colm E Smyth - who had got into a great position - and he found the back of the net.

Instead of building on that goal Abbeylara allowed Mullinalaghta to hit back with Kevin Mulligan their main man. The full-forward hit over three points, with two frees and one excellent effort from play, to restore his side’s three point advantage by the 19th minute.

Jason Kelly got Abbeylara’s first point of the game in the 24th minute as St. Columba’s held a 0-6 to 1-1 lead at half-time. Abbeylara cut the deficit with a Barry Smyth point before Kevin Mulligan was on target again minutes later before Abbeylara responded with another point from Barry Smyth.

A lovely move involving Eric Sullivan and Donie McElligott yielded another point for St. Columba’s in the 39th minute before Abbeylara goalkeeper Damien O’Connor found the range with a well-taken ’45.

In the 47th minute Colm E Smyth drew Abbeylara level for the second time in the game. But Kevin Mulligan turned provider for Eric Sullivan to point in the 51st minute and edge St. Columba’s back in front. One minute later Conor McElligott fired over a good point but that was to be their final score as Abbeylara finished the game well.