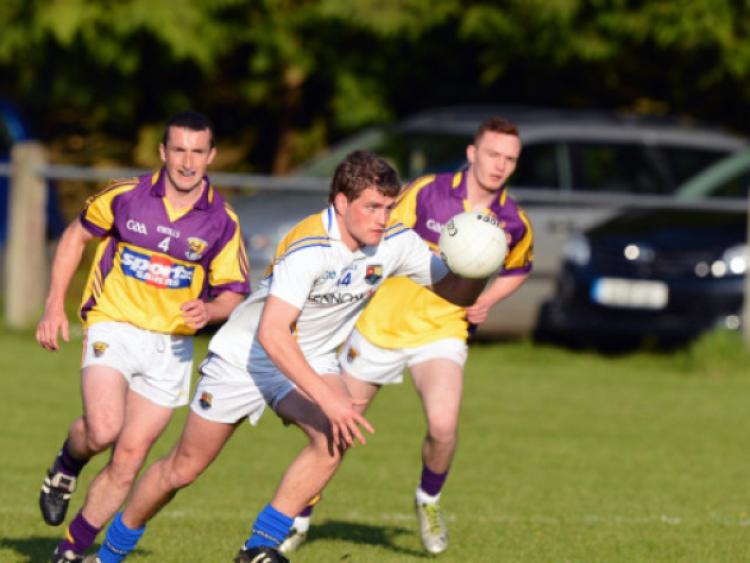 Managed by Eugene McCormack, the Longford junior footballers are through to the Leinster Championship semi-final after getting the better of Wexford at the Farmleigh grounds (situated in the Enniscorthy area) on Wednesday evening last and the matchwinner was former senior player Paddy Dowd who fired over a total of six points (four frees).

Managed by Eugene McCormack, the Longford junior footballers are through to the Leinster Championship semi-final after getting the better of Wexford at the Farmleigh grounds (situated in the Enniscorthy area) on Wednesday evening last and the matchwinner was former senior player Paddy Dowd who fired over a total of six points (four frees).

It was a real ding-dong battle with Longford holding a slender 0-8 to 0-7 lead at the break with Dowd (2), Kevin Burke, Marty Mulvey and Paul McKeon shooting scores early on in this entertaining encounter but Wexford fought back and the sides were deadlocked entering the closing stages of the game with a draw looking the likely outcome.

The chief marksman for Wexford was ex-senior star Matty Forde, who clocked up five points (one free), but Longford found that little bit extra and went back in front when Dowd kept his composure to land a well struck free for the winning score in the 56th minute.

Showing the greater urgency for most of the game, the midlanders held out to earn a crack against the title holders Cavan in the last four clash at Glennon Brothers Pearse Park on Wednesday evening next June 12th and a chance to gain revenge for the last gasp defeat against the neighbouring rivals at the same stage of the competition last year.

Kildare, most emphatic 1-17 to 1-7 winners over Meath in the first round last week, will have home advantage in the other semi-final against Wicklow.

Although Wexford closed the gap with points from Kevin Gore and Kevin O’Grady (free), Longford were that little bit quicker off the mark in every sector of the pitch, and the inter-linking play of their forward unit gave the Wexford rearguard a torrid time throughout. Wexford also had their goalkeeper Tom Hughes to thank for keeping them in the contest when he pulled off a superb point-blank save to deny a certain Longford goal after 18 minutes.

Paddy Dowd punished Wexford indiscretion twice with a brace of frees before the break, although Matty Forde really made his mark before half-time too, kicking three fine points from play as the home county went in trailing by 0-8 to 0-7 at the break.

A Paul McKeon free stretched Longford’s advantage to 0-9 to 0-7 after 38 minutes and the sides shared the next four points, with Sean Gaul soloing through to score a fine point on 45 minutes. Paddy Dowd continued to inspire his team with a fine point to edge the visitors back ahead by two with fourteen minutes remaining.

However, Wexford really began to exert their authority during the final quarter, and enjoyed their most sustained period of possession in the closing stages. Matty Forde got the ball rolling when he cut in to curl over a fine right-footed kick on 48 minutes, and the Wexford supporters really rallied behind their team when Kevin Gore levelled matters for only the second time two minutes later, 0-11 apiece.

But that was as good as it got for the home side as they just couldn’t penetrate the Longford defence again, with Barry O’Farrell and substitute Darren Farrelly in particular doing excellent defensive work.

The winning score came from yet another free conceded by the Wexford defence four minutes from the end with Paddy Dowd on target again to clinch a deserved victory, although Longford had to endure a very anxious moment just before the final whistle with Kevin Rowe squandering a possible goal chance for Wexford.