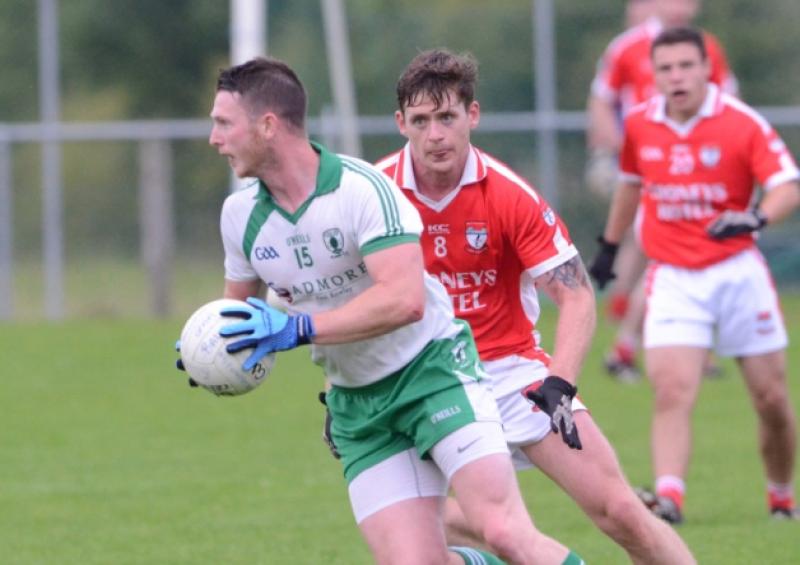 It was all too easy for Killoe Emmet Og as they brushed aside the weak challenge of Ballymahon in the play-off at Keenan Park, Ardagh on Sunday evening last in advancing to the Senior Football Championship quarter-final against St. Columba’s; a repeat of last year’s county final.

It was all too easy for Killoe Emmet Og as they brushed aside the weak challenge of Ballymahon in the play-off at Keenan Park, Ardagh on Sunday evening last in advancing to the Senior Football Championship quarter-final against St. Columba’s; a repeat of last year’s county final.

Next Sunday’s game against Mullinalaghta will be a much sterner test for the Killoe side as they bid to retain the Connolly Cup. Ballymahon were poor and could and should have made it more competitive. They are a better side than the scoreline suggests.

Ballymahon knew if they were to have any chance in this game they could not concede goals but with less than one minute gone on the clock Larry Moran raised the green flag for Killoe.

Minutes later Ronan McGoldrick set up his brother Denis and he got in to grab his side’s second goal in the 5th minute. One minute later the lead was seven points as Ballymahon struggled to contain the Killoe forwards.

A free from Colm Flynn in the 9th minute opened up Ballymahon’s account. He then had a shot saved by Killoe keeper Cillian Burns before Thomas Mulvihill hit over an excellent point.

Emmet Og then got a stranglehold on the game and hit over five unanswered points and created another goal opportunity but Sean McCormack shot straight at Ballymahon netminder Kyle Fitzmaurice.

Points were exchanged between Mark Connor and Mark Hughes before Killoe once again took control and ended the first half well with points from Daniel Mimnagh, Sean McCormack, Denis McGoldrick and Michael Quinn. They went in at the break ahead by 14 points, 2-11 to 0-3.

Ballymahon were a lot brighter in the early exchanges of the second half and Mark Lennon got their fourth point in the 32nd minute. Three minutes later they got a goal through Thomas Mulvihill. He followed up with a point and Colm Flynn was on target again from a free to cut the gap to seven.

If the crowd had hoped there would be some kind of a revival from Ballymahon, they were wrong as Killoe replied with points from Moran, Quinn and Denis McGoldrick.

Ballymahon’s next score was a free from Flynn. Killoe’s response was an excellent point from Mark Hughes and a free from Denis McGoldrick. In the 51st minute Killoe got their third goal when Moran set up Daniel Mimnagh. Sean McCormack scored a fine individual goal minutes later and that was to be his side’s final score of the game.

In the final few minutes Ballymahon got consolation scores with Edwin Nally and Colm Flynn (free) pointing and Thomas Mulvihill getting a second goal. It added some respectability for Ballymahon who now face Mostrim in a relegation play-off on Sunday evening next.