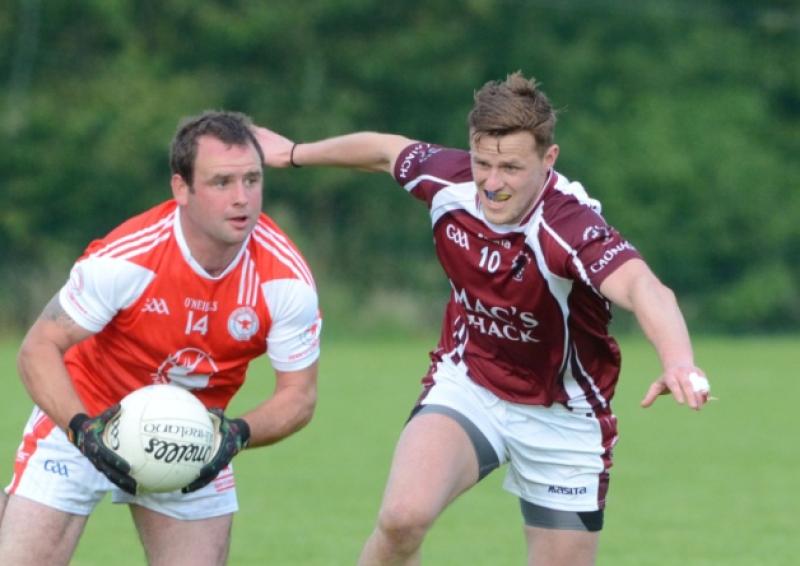 Kenagh were denied a semi-final spot in the Intermediate Football Championship when Sean Connolly’s snatched a last gasp draw to keep alive their hopes of capturing the Gerry Hennessy Cup.

Kenagh were denied a semi-final spot in the Intermediate Football Championship when Sean Connolly’s snatched a last gasp draw to keep alive their hopes of capturing the Gerry Hennessy Cup.

Dessie Reynolds fired over the equalising point from a free in the fourth minute of stoppage time (his ninth score in total) to earn the so fortunate Ballinalee outfit the result they required to qualify for a last four clash against Killashee St Brigid’s.

But Kenagh were raging with referee Patrick Maguire in the aftermath of this close encounter at Devine Park, Edgeworthstown on Saturday evening last and rightly so as they were the victims of a number of dubious decisions that went against them and the Granard official was subject to a lot of criticism for his handling of the game.

Kenagh needed a win to make it through and looked to have done enough when minor Thomas McGann shot over the bar in the 59th minute. But as the game dragged on into additional time there were still hope for Connolly’s and Reynolds came to the rescue with virtually the last kick of the Group 2 game.

It was rough justice on Kenagh, who are knocked out of the Intermediate Championship by virtue of this draw, while Connolly’s are now just one step away from reaching the county final for the second year in succession.

The absence of the injured Stephen Lynch, their regular midfielder, proved to be a big loss but they still managed to lead by 0-7 to 0-4 at the break and would have been further in front had a Joe Heaney goal attempt not hit the butt of the post in the 13th minute.

Four of their seven points came from the accurate Dessie Reynolds (three frees and a ‘45) while Trevor Murtagh landed a couple of fine efforts from play in quick succession.

Joe Heaney had opened the scoring for wind assisted Connolly’s in the 7th minute but Kenagh kept in touch thanks to a brace of points from Shane Doyle with Brendan Wallace (free) and Sean Canavan (an excellent strike) also on target in the first half.

Losing Gary Doyle to a black card in the 26th minute was a blow, as were the injuries sustained by Ian Farrell (forced to retire just before the break) and Mark Nolan, the latter eventually withdrawn in the 53rd minute, but Kenagh were still the better team in the second half and should have emerged victorious.

With the wind now in their favour, Kenagh got the opening score on the changeover when Shane Doyle blasted the ball over the bar in the 36th minute and moments later they hit the front with a goal from Rory Connor.

That was really putting it up to Connolly’s but they responded with three points from frees converted by Dessie Reynolds while substitute Thomas McGann replied for Kenagh.

The south Longford side then regained the lead with a brace of points from Rory Connor in quick succession before Reynolds slotted over another free to leave the sides all square again with 54 minutes gone on the clock.

Another point from Thomas McGann looked to have won the game for Kenagh, only for Dessie Reynolds to weave his way through in one last attack. And referee Patrick Maguire decided that the county player was fouled in awarding a close range free that was subsequently converted to send lucky Sean Connolly’s through to the semi-final.