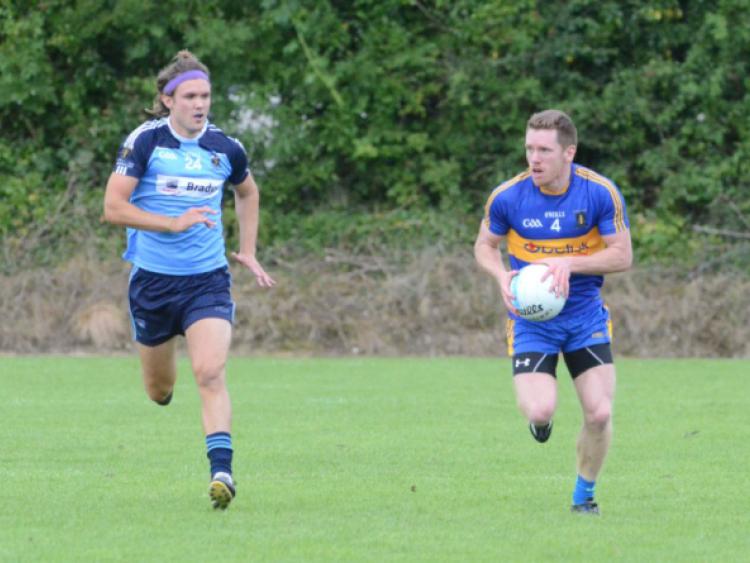 A well-taken point from Gary Maguire in stoppage time earned Dromard another crack at Killoe as they pipped Longford Slashers in a most entertaining Senior Football Championship quarter-final replay at Emmet Park on Sunday last.

A well-taken point from Gary Maguire in stoppage time earned Dromard another crack at Killoe as they pipped Longford Slashers in a most entertaining Senior Football Championship quarter-final replay at Emmet Park on Sunday last.

Forced to field without suspended duo Peter Reynolds and Niall Vance and who were also minus the services of the injured Jamsie Martin, Dromard showed a lot of character in getting through to the last four at the second attempt.

Whether they are good enough to overcome Emmet Og in the semi-final at Pearse Park on Sunday evening next remains to be seen but getting the better of old rivals Slashers was a big boost in gaining some measure of revenge for the defeats in both the 2010 and 2013 senior title decider.

It was Denis Connerton’s last championship game in charge of Slashers after six years at the helm, stepping down at the end of the season as he makes his return as manager of the county senior squad.

His hopes of a final fling at Connolly Cup glory suffered a setback with injuries ruling out Gareth Ghee and Marc Diffley but Slashers deserve considerable credit for giving it their best shot.

Winners of three senior championships during Connerton’s successful reign, the sky-blues are clearly not the same force they used to be but they went down fighting in making their exit.

Just the minimum of margins separated the sides at the final whistle but it was Dromard who dominated the first quarter of this gripping contest to lead by 0-4 to 0-1 with their scores coming from Declan Mimnagh (2), Francis McGee (free) and Gary Maguire.

Slashers solitary reply came from a free converted by Colin Smith in the 11th minute and that was after Sean Clarke had a chance of a goal but was blocked out with his brother Ruairi shooting straight at opposing keeper Damien Sheridan in the same attack.

The sides then shared four points with Trevor Clendenning and Colin Smith (free) on target for Slashers while Francis McGee fired over a couple of excellent efforts for Dromard and was causing a lot of damage in attack.

But the 2013 county champions gradually got their act together and after Colin Smith converted a free in the 24th minute, a brace of tremendous points followed from Andrew Dalton to leave the sides all square approaching the break.

Then in first half stoppage time Michael Brady set up Clendenning for another score that saw Slashers hold a slender 0-7 to 0-6 advantage and that was extended when Paul Kelly shot over the bar with a couple of minutes gone on the changeover.

But Dromard came storming back to register three points in a row through Cian Mimnagh (excellent effort), Francis McGee (free) and Ross McNerney (a fine strike from a tight angle) in a short space of time.

The ding-dong battle continued with the Smith brothers Colin (free) and Mark (back home from his travels abroad) getting a score apiece before McGee, after missing a handy free, got another point when a goal was on in the 43rd minute.

Moments later, Ronan McEntire landed a point to put Dromard 0-11 to 0-10 ahead and soon after Slashers defender Dermot Brady joined the attack to fist the ball over the bar.

In between, Gary Maguire had a goal chance for Dromard but his point-blank shot was saved by opposing keeper Colm Farrell. Exciting stuff, to say the least, and Slashers proceeded to squander some decent chances.

A wide apiece followed from Padraig Martin and Barry Gilleran before Gary Maguire scored the winning point under considerable pressure and then Mark Smith lost the ball at the other end in what was Slashers last chance to force extra-time.

There was still time for another Dromard attack when a goal attempt from Ross McNerney was blocked down but they had done enough to book their place in the semi-final.