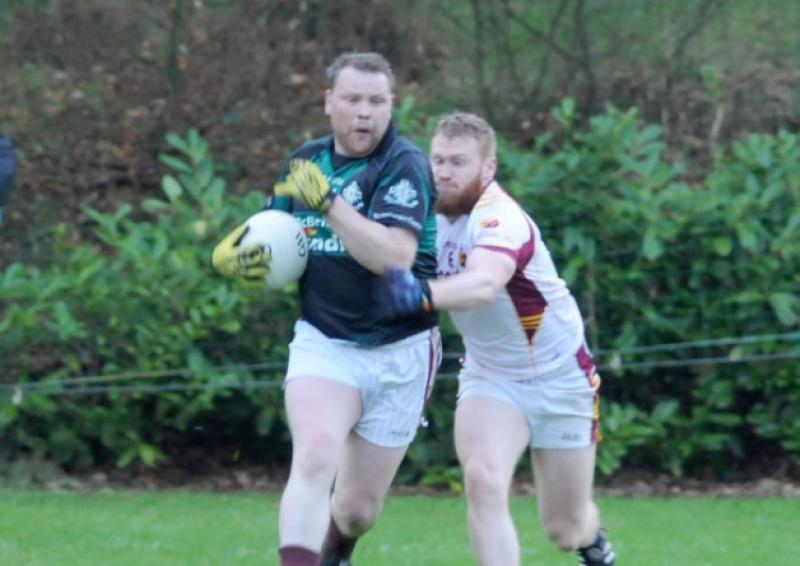 Building on the boost of winning the U-21 ‘A’ Championship title last year, the Fr. Manning Gaels seniors scored a significant victory in Division 1 of the All County Football League when they got the better of Mullinalaghta at The Laurels on Wednesday evening of last week.

Building on the boost of winning the U-21 ‘A’ Championship title last year, the Fr. Manning Gaels seniors scored a significant victory in Division 1 of the All County Football League when they got the better of Mullinalaghta at The Laurels on Wednesday evening of last week.

Former Leitrim All-Star Seamus Quinn (Gortletteragh) is the new manager of the Drumlish/Ballinamuck side, who have now won three of their four league fixtures this season, and they produced a very committed performance to overcome the reigning Leader Cup champions St. Columba’s.

The Gaels were leading by a single point, 0-10 to 0-9, when wing back Martin Cassidy surged forward to fire home a cracking goal midway through the second half following a well-worked move that also involved Padraig Gill and Petie Collum, the latter providing the final pass for the decisive matchwinning score.

The visitors increased their advantage with a couple of points in quick succession from Padraig Gill (free) and Podge Gill, both of whom figured most prominently throughout the game, and when Darren Farrelly shot over the bar in the 51st minute there was no way back for Mullinalaghta who now trailed by 1-13 to 0-9.

Having said that, St. Columba’s tried hard to engineer a badly needed goal in the closing stages of the game but the resolute Fr. Manning Gaels defence stood firm in restricting the home side to a brace of points through John Keegan and James McGivney (free).

And it was the Gaels who had the last say when Podge Gill landed a great long range point in the 60th minute and Mullinalaghta are finding the going tough this season, particularly with county players Donal McElligott and JJ Matthews missing.

McElligott and Matthews are currently out of the country and are sorely missed, to say the least. On a positive note, Kevin Mulligan is back and he made a big impact in attack to score six points from play against the Gaels.

With Diarmuid Cooney putting in immense workrate at midfield, it must be said that Fr. Manning Gaels were full value for their win but it might have been a different story but for a fine save by keeper Paddy Collum who parried a goal attempt from Shane Mulligan over the bar before the break.

David Cassidy had a goal chance for the Gaels in first half stoppage time but had to settle for a point which left his side in a slender 0-7 to 0-6 lead at half-time. Cassidy accounted for a couple of other scores while also on target for the visitors in the first half were James Noonan (free), Podge Gill, Darren Farrelly and Padraig Gill.

Kevin Mulligan (3), Ruairi McElligott, David McGivney and Shane Mulligan replied for Mullinalaghta, who were under a bit of pressure in the early stages of the second half as the Gaels extended their lead with a point apiece from David Cassidy and Padraig Gill.

But St. Columba’s came storming back in a dominant spell that yielded three points in a row from Kevin Mulligan between the 34th and 43rd minute to leave the sides all square, 0-9 to 0-9.

That was really putting it up to Fr. Manning Gaels but after regaining the lead with an excellent point from Petie Collum, the crucial goal materialised in the 46th minute with Martin Cassidy planting the ball in the back of the Mullinalaghta net.