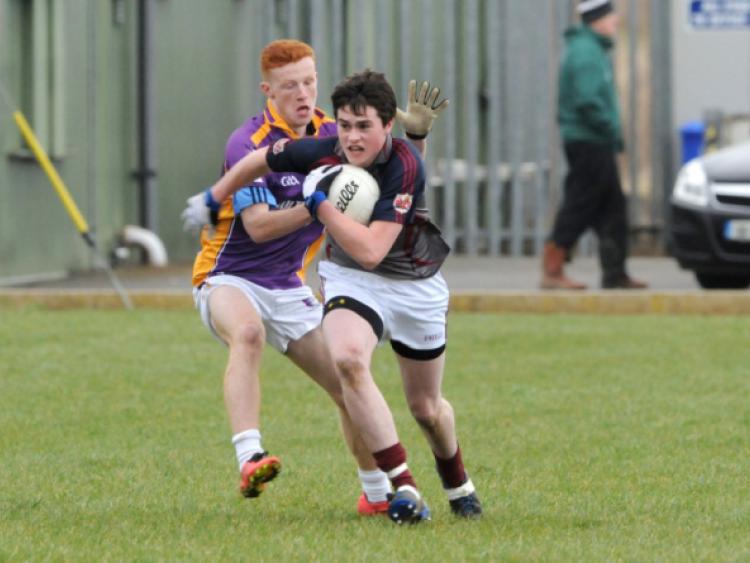 Ballymahon Vocational School were crowned Leinster Senior ‘D’ football champions at the windswept Dunganny grounds on the outskirts of Trim on Saturday last but lived very dangerously indeed in the second half of the final with outstanding goalkeeper Jack Fox the saviour in the hard earned win over St Paul’s College, Raheny.

Ballymahon Vocational School were crowned Leinster Senior ‘D’ football champions at the windswept Dunganny grounds on the outskirts of Trim on Saturday last but lived very dangerously indeed in the second half of the final with outstanding goalkeeper Jack Fox the saviour in the hard earned win over St Paul’s College, Raheny.

Fox produced no less than five crucial saves, including a penalty midway through the second half at a stage when the Dublin outfit were piling on the pressure in their frantic efforts to close the gap after trailing by five points at the break.

Minutes later Thomas McGann had a great chance to put Ballymahon VS in complete control but the Kenagh lad had his point-blank shot for a goal saved by the opposing keeper Josh Rooney and things became very tight thereafter.

St Paul’s pushed on to fire over three points in a row through Shane Leahy (free), Ryan Bradshaw and Kevin McDonnell to leave just the minimum of margins (0-9 to 0-8) separating the sides and in between Ballymahon VS corner-forward Conor Dillon had a goal attempt cleared off the line.

But the break that Ballymahon VS badly needed materialised in the 56th minute when substitute Thomas Lennon put Sean Kelly through for a decisive goal that clinched the title triumph, although St. Paul’s did hit back with a point from Darren Byrne.

In the final minute of normal time, Conor Dillon shot over the bar to make absolutely certain of the Ballymahon VS success and they can now look forward to the All-Ireland Senior ‘D’ semi-final against the Connacht champions Sancta Maria College, Louisburgh (Co Mayo) on Sunday next at a venue to be confirmed.

Apart from the major contribution made by goalkeeper Jack Fox, competent full-back Michael Cahill was also very much to the fore for Ballymahon VS who led by 0-9 to 0-4 at half-time with the scores coming from Shane McGoey (two frees), Thomas McGann, John Tumelty (3), Conor Dillon, Sean Kelly and captain Enda Farrell who surged forward to shoot over the bar in the 27th minute.

Impressive St Paul’s midfielder Shane Leahy registered all four points (frees) in the first half and the Dubliners were denied a goal in stoppage time when Jack Fox made a point-blank save to keep his net intact.

But with the advantage of the strong wind on the changeover the Raheny college really put it up to Ballymahon VS and after Fox was very brave indeed to prevent the opposing full-forward Jack Kelly from scoring a goal right on the line, he came to the rescue again moments later when alert to stop a deflected shot from Ryan Bradshaw.

St Paul’s just could not find a way past the fabulous Fox, who saved a point-blank effort from Darren Byrne in the 39th minute before Ballymahon VS eventually conceded their first score in the second half when Shane Leahy landed a point from play.

Thomas McGann then squandered a good chance in a rare attack for the south Longford school, who looked to be in trouble when St Paul’s were awarded a penalty in the 45th minute.

But the inspirational Jack Fox saved the kick taken by Cian Giles and this proved to be a key factor in the eventual outcome as Ballymahon VS got back into the game with the Sean Kelly goal in the closing stages sealing the success.