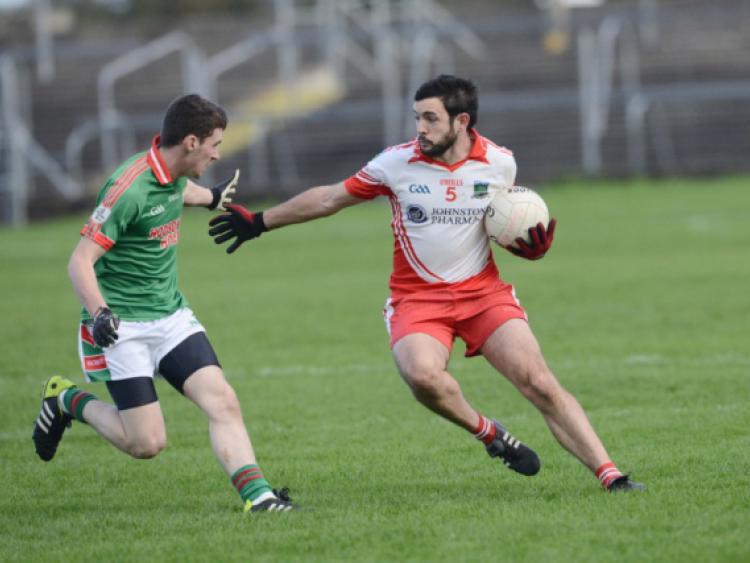 Blustery days sometimes define games and the Roscommon Senior Football Championship Final in Hyde Park, Roscommon on Sunday last proved to be one of those days. A generally young and inexperienced St. Faithleach’s Ballyleague team were taking on the vastly experienced St. Brigid’s Kiltoom side, who achieved the five-in-a-row in emphatic fashion.

Blustery days sometimes define games and the Roscommon Senior Football Championship Final in Hyde Park, Roscommon on Sunday last proved to be one of those days. A generally young and inexperienced St. Faithleach’s Ballyleague team were taking on the vastly experienced St. Brigid’s Kiltoom side, who achieved the five-in-a-row in emphatic fashion.

Further despair befell St. Faithleach’s in the 7th minute when another long ball in was allowed to hop and Senan Kilbride tapped it down to the inrushing Frankie Dolan who dispatched the ball to the back of the net.

In the 8th minute St. Brigid’s full back Darragh Donnelly struck a long range point and his fellow defender Robbie Kelly followed up on a great save by St. Faithleach’s keeper Steve O’Connor to volley the ball over the bar.

A feature of the first half was that only one of the vaunted St. Brigid’s attack scored with the other two scores coming from the full-back-line.

St. Faithleach’s started the second half brightly, scoring two points through Diarmuid Murtagh and David Rooney. But St. Brigid’s responded with Frankie Dolan scoring another free and Karol Mannion then came bursting through from midfield to strike over a point.

Aidan Dooney scored an excellent point for St. Faithleach’s before a Dolan free followed and then Senan Kilbride sprung to life, scoring a point and followed with a goal after an excellent interchange.

St. Faithleach’s continued to work hard in fighting a losing battle and were rewarded with an excellent point from Ciaran Murtagh and another from Aidan Dooney in the 46th minute, which proved to be St. Faithleach’s final score of the game. Frankie Dolan, before being substituted, tapped over a free in the 52nd minute.

St. Brigid’s scored a third goal in the 56th minute when substitute Darragh Blaine thundered a shot off the post which fell into the path of Senan Kilbride, who duly tapped the ball into an empty net.

While St. Brigid’s were the stronger side throughout they found it hard to score, apart from the lethal Frankie Dolan. A feature of the game was that for 44 minutes only one of the St. Brigid’s forwards scored and for the remainder of the match only one further forward scored. They will have to improve greatly if they want to re-emerge as serious contenders for provincial and All-Ireland honours.