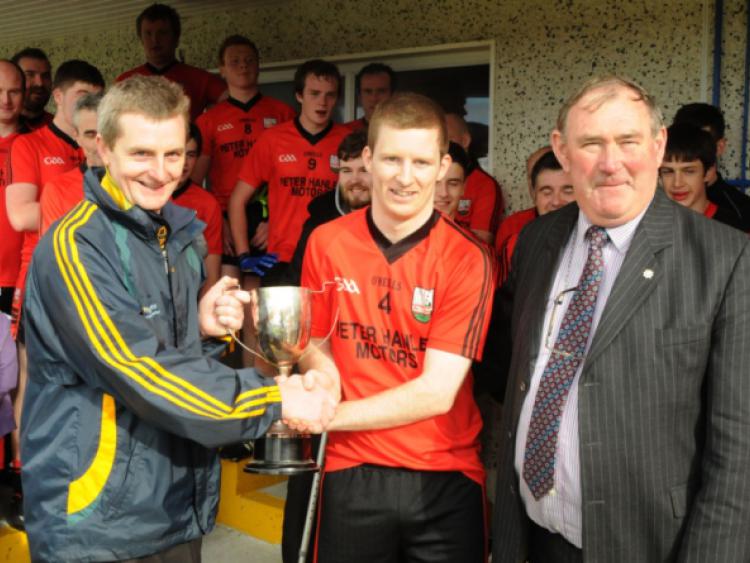 The presence of such a prolific forward in Derek Farrell on the Cashel team proved to be the decisive factor as he fired over six points (four frees) in their well deserved win over Ardagh in the Junior ‘B’ Football Championship Final at Pearse Park on Sunday last.

The presence of such a prolific forward in Derek Farrell on the Cashel team proved to be the decisive factor as he fired over six points (four frees) in their well deserved win over Ardagh in the Junior ‘B’ Football Championship Final at Pearse Park on Sunday last.

St. Patrick’s found the going particularly tough in the first half as they trailed by 1-6 to 0-2 at the break with prominent Cashel defender Shane Muldoon joining the attack to grab a vital goal in the 9th minute, the end result of a fine move that split the opposing defence wide open.

Ardagh actually opened the scoring when Martin Halpin shot over the the bar in the first minute but Cashel, driven on by their influential half-back-line, then took over completely to clock up 1-6 on the trot, the points coming from Derek Farrell (3 frees), Niall Donlon (two fine efforts) and Michael Donlon.

Paddy Ganley landed a point from play for St. Patrick’s in the closing stages of the first half and while Cashel hit back with a score from Ciaran Clyne immediately on the changeover, Ardagh then enjoyed a dominant spell which yielded five points in a row between the 33rd and 39th minutes.

Four frees were converted by Ganley before Cathal McGlynn got a point and just the goal was separating the sides at this stage, 1-7 to 0-7.

But the pressure was eased on Cashel when Derek Farrell slotted over a free midway through the second half and Farrell then registered a couple of scores from play - the second of which was a goal chance in the 56th minute when he blasted the ball over the bar from close range.

Eoin Flood also got his name on the scoresheet as Cashel made certain of the Junior ‘B’ championship success, much to the delight of team manager Martin Skelly and fellow mentor Noel Mulvihill, and it mattered little that Niall Donlon was sent-off for a second yellow card offence in the 58th minute.

Ardagh, to their credit, showed a lot of spirit throughout the second half in a determined bid to salvage the situation but they were always fighting a losing battle with Cathal McGlynn scoring a consolation goal in the final minute of normal time.