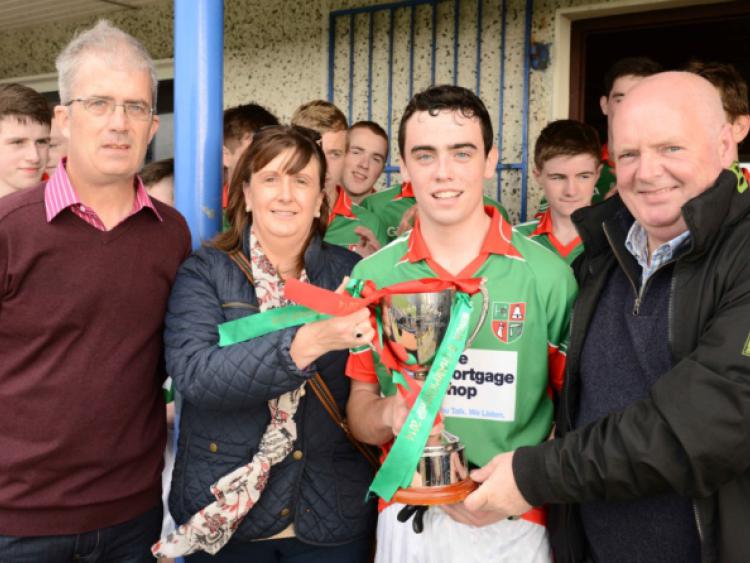 All the damage was done in the first half with St. Colmcille’s scoring four goals to establish a very commanding 4-7 to 0-3 lead at the break and from there on Western Gaels were fighting a losing battle in the Minor ‘B’ Football Championship Final at Pearse Park on Saturday last.

All the damage was done in the first half with St. Colmcille’s scoring four goals to establish a very commanding 4-7 to 0-3 lead at the break and from there on Western Gaels were fighting a losing battle in the Minor ‘B’ Football Championship Final at Pearse Park on Saturday last.

Ironically, the title winners failed to register a solitary score in the second half but they were never going to blow such a massive advantage with the wide margin of 16 points separating the sides despite the determined efforts of the Rathcline/Young Grattans amalgamation to get back into contention on the changeover.

With the backing of the very strong wind and Cathal Reilly gaining a decisive edge at centrefield, there was just no stopping the rampant Colmcille outfit with Cathal McCabe proving to be a constant threat in a very sharp attack.

McCabe scored goals in the 20th and 22nd minutes, with Ruairi Harkin also shooting to the back of the Western Gaels net in between, and this glorious spell put the issue beyond all doubt.

Colmcille built on a great start which saw them storm into a comfortable 1-5 to 0-0 lead after just twelve minutes - the goal coming from Dylan McCabe while the points were fired over by Alan McKeon, Ruairi Harkin, Cathal Reilly (2) and Rory Hawkins.

Western Gaels had to wait until the 15th minute to get their opening score when defender James Moran joined the attack to shoot over the bar and another point followed immediately from John Hand before Colmcille regained the upper hand with a brace of scores through defender Ciaran McKeon and Hawkins.

Then came three more goals in the space of just over two minutes and that was as good as it got for Colmcille, who could afford the luxury of squandering several chances during the course of the game including a number of other goal chances - three in the closing stages.

Clayton Finn got another point for Western Gaels late in the first half and then John Hand shot narrowly wide in his attempt to grab a badly needed goal before the break.

After the Colmcille keeper Colm Kilbride was called upon to make a great save in the opening minutes of the second half, preventing Finn from finding the back of the net, Western Gaels (now with the aid of the strong wind) went on to enjoy their best spell of the game which yielded 1-4.

Oisin O’Sullivan fired home the goal while three of the points (two frees) came from John Hand with Clayton Finn getting his second score, the latter on target in the 43rd minute.

But Western Gaels were guilty of some poor finishing in the second half and there was no further scores until the second minute of stoppage time when substitute Andrew Ward got a consolation goal for the gallant losers, who suffered a major setback with injury ruling out county minor captain Shane Kenny.