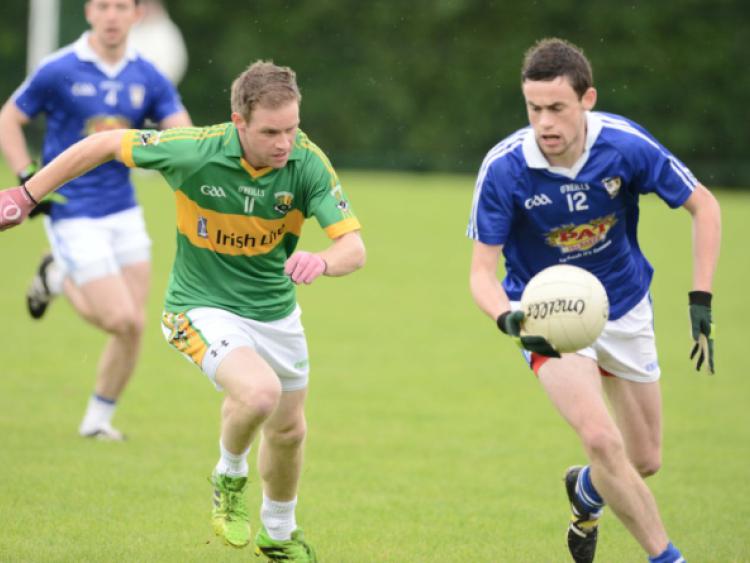 St. Mary’s Granard were thrown a lifeline in their quest to remain in this year’s Senior Football Championship but had to battle hard for a four points win over a determined Ardagh St. Patrick’s side at Devine Park, Edgeworthstown on Sunday last.

St. Mary’s Granard were thrown a lifeline in their quest to remain in this year’s Senior Football Championship but had to battle hard for a four points win over a determined Ardagh St. Patrick’s side at Devine Park, Edgeworthstown on Sunday last.

Going into this game both sides were without a win and knew how important the two points were. To their credit a fairly depleted Ardagh gave it their all and certainly put it up to Granard. St. Mary’s will be disappointed with their performance; it was a game they bossed but their shooting was terrible as they took the wrong options on a number of occasions.

It was the substitutes that made a difference for Granard with Mark Tully, Eoin Higgins and Declan Hynes driving them on, particular in the final few minutes.

Straight from the throw-in Granard registered their first point; a nice score from David Hynes. They then dominated the game but kicked six wides in a row with the ball rarely going past midfield. St. Mary’s did eventually get their second point in the 12th minute through David Hynes.

After being completely outplayed, Ardagh got their first score in the 13th minute; a point from Finn Hartmann. Granard then took a firm grip of the game after that.

David Blessington pointed and that was followed up by two fine efforts from Stephen Lynch to put Granard ahead by four by the 19th minute. Shane Henry pointed for St. Patrick’s in the 21st minute before Granard took control again but for all their possession they just added on two more points before the break to lead by 0-7 to 0-2.

Lynch hit over a free in the 25th minute while Conor Mallon got a point in first half stoppage time.

Eight minutes had elapsed before the first score of the second half came; a free from the boot of Henry. Two minutes later Edward Powell brought Ardagh to within three of Granard with a nice point.

Granard hit back and stretched their lead to six points by the 46th minute. Paul Smyth with a point in the 42nd minute and that was followed up by a good score from Mallon before he was on target again.

Just when it looked like Granard would pull away, Ardagh closed the gap with a great goal from Shane Powell in the 47th minute to leave it a three point game, 0-10 to 1-4.

The gap was just two one minute later when Shane Henry fired over a free but that was the closest Ardagh got to Granard as they just couldn’t win possession in order to get those vital scores.

Two points from Declan Hynes put Granard four ahead by the 54th minute but a point from Henry in the 58th minute made for a nervous final few minutes.

Granard got a vital point from Declan Hynes in stoppage time to make certain of the victory and the chance of getting to the quarter-finals via a play-off against Mostrim.