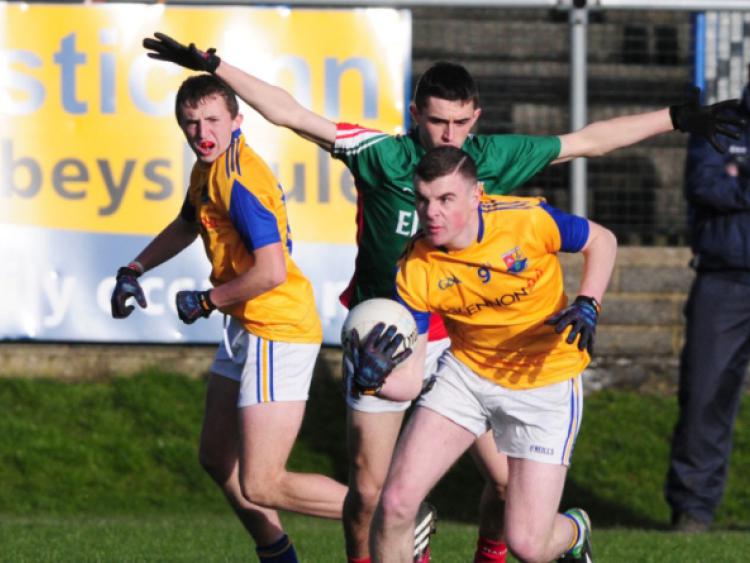 David McGivney saved Longford from a second defeat in the Connacht Minor Football League when he scored the matchwinning goal deep into stoppage time following a dramatic finish to the game at Glennon Brothers Pearse Park on Saturday evening last.

David McGivney saved Longford from a second defeat in the Connacht Minor Football League when he scored the matchwinning goal deep into stoppage time following a dramatic finish to the game at Glennon Brothers Pearse Park on Saturday evening last.

Reigning All-Ireland minor champions Mayo were pipped at the post after looking all set to emerge victorious when Conor Byrne planted the ball in the back of the net in the fourth minute of additional time. But resolute Longford, trailing by two points, launched an immediate counter-attack with substitute Robbie Clarke providing the pass that led to the last gasp McGivney goal.

It was no more than the midlanders deserved as they were the better side for most of the game and were particularly impresive in the early stages as they raced into a comfortable 0-6 to 0-1 lead with the points coming from Rian Brady (2), Ciaran Donohoe, Nigel Rabbitte (2) and Cathal McCabe.

But Gareth Johnston’s side managed just one more score during the remainder of the first half with Rian Brady on target again in the 26th minute and Mayo gradually managed to close the gap to just the minimum of margins at the break, 0-7 to 0-6.

It developed into a real ding-dong battle in the second half with Longford adding four more points to their tally - three from midfielder Shane Kenny (two frees) along with another score from Rian Brady and this duo were particularly prominent for the home county.

However, Mayo were thrown a lifeline with a gift goal from substitute Matthew Burke in the 43rd minute but were extremely fortunate when a Shane Kenny shot was cleared off the line by Cathal Scott in the final minute of normal time.

It was exciting stuff in the lengthy stoppage time which stretched to six minutes and the Mayo goal was quickly cancelled out by David McGivney who struck to win the game for Longford in what was a very testing competitive fixture in the build up to the Leinster Championship Round 1 clash against Dublin at Pearse Park on Saturday April 19th.

The Longford minor squad have organised a fundraising draw which will take place at the Leinster Minor Championship first round clash against Dublin at Glennon Brothers Pearse Park on Saturday April 19th. Tickets cost 10 euro each with the following prizes to be won:

Ist Prize: 2 Tickets for One Direction Concert and 500 euro in cash

4th Prize: Meal Voucher for Viewmount House to the value of 250 euro