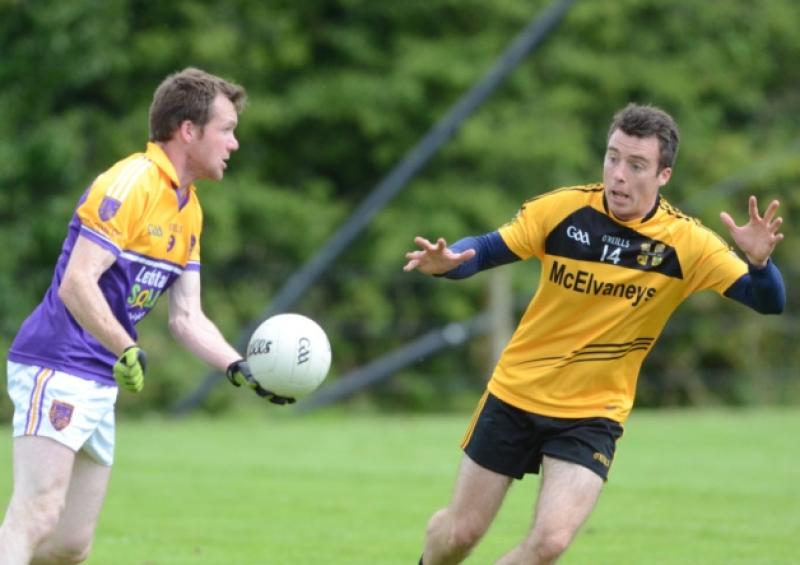 Damien Monaghan’s goal in the 60th minute gave Ballymore their first win in this year’s Intermediate Football Championship and opened up Group 1 with still plenty to play for.

Ballymore trailed by four at the break (0-5 to 0-1) but they showed great character to come back and snatched victory right at the end. It was hard luck on Grattans keeper Eoin Kelly who slipped and was unable to stop Monaghan’s speculative effort.

Grattans will rue missed chances, although Ballymore were also wasteful in front of the posts and took wrong options on a number of occasions.

After two minutes Grattans got their opening score of the game; Ian Small was fouled and Gerard Victory stepped up to point the free. Victory hit over another free in the 10th minute.

Ballymore’s first and only score of the first half was a free from Damien Monaghan in the 13th minute. Grattans replied with a fine point from Timmy Hegarty in the 14th minute.

In the 17th minute Kiel Dempsey tested Grattans keeper Kelly. Grattans then stretched their lead to four with two points in quick succession

Ballymore had chances but couldn’t convert them. Before the break they had calls for a penalty waved away by referee Aidan Dowler when it appeared that Mel Creegan was pulled down in the square.

Grattans squandered a few opportunities in the opening minutes of the second half. And in the 37th minute Ballymore cut the deficit to just one point when Kiel Dempsey found the back of the net.

The Stonepark side had chances to hit back but shot a few wides before Gerard Victory fired over another free in the 42nd minute. He followed that up with a brace of fine points from play, the second in the 45th minute, but that was to be their last score of the game.

Damien Monaghan (free) and two fine points from Mattie Gorman saw Ballymore close the gap to the minimum of margins by the 58th minute.

And just when it seemed that Grattans were going to hold out for the win, they conceded a soft goal for what proved to be the matchwinning score with time almost up.