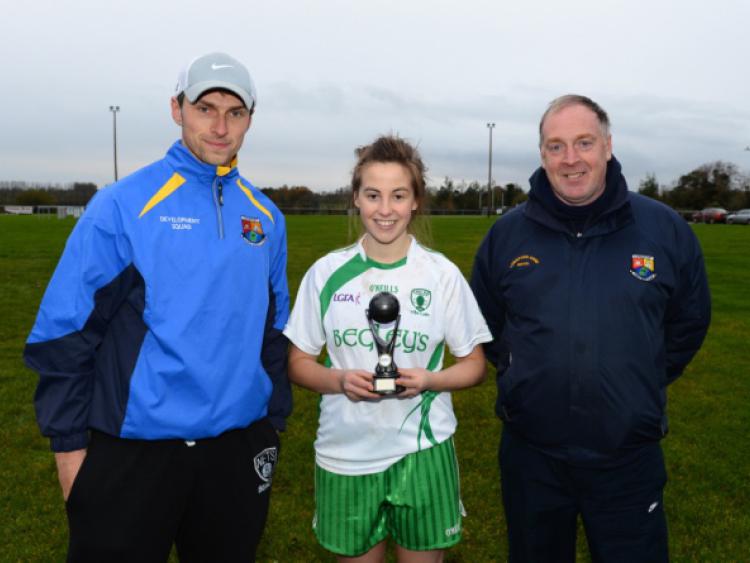 Clonguish were leading for about the first 20 minutes but Killoe eventually found their form and went in at half-time leading 1-7 to 1-4. Killoe started the second half really well and were very much the dominant force on the changeover.

While Clonguish launched some promising attacks they just could not break down the resolute Killoe defence. Clonguish got a penalty about 15 minutes into the second half which they scored and this gave them a lifeline.

But Killoe rallied again and for the last 8 minutes Clonguish just seemed to give up the fight with the wide margin of 14 points separating the sides in the finish.

Under 14 Development: U-14 Development Squad Training and Trials for County U-14 Team continue on Saturday mornings for the next 3 weeks in Shroid starting at 9.45am. Finishing 11.30am. It is important that all girls interested in playing county u14 football attend the remaining trials so please inform any potential county players and encourage them to attend. Any inquiries to Barbara on 0868597988, 0862753874, or email barjones@eircom.net

League Finals: Our adult season came to a close at the weekend as we crowned our league champions. Well done to the Killoe and Colmcille ladies who were crowned Division 1 and Division 2 champions respectively. Our minor competition continues next weekend as Ballymore face Clonguish in the A competition at home and Carrickedmond host Ballymahon/Forgney in the B competition, both games on Sunday at 12 noon.

All-Ireland Club Semi-Final: Very best wishes to the St. Helen’s Club as they host Dunedin Connolly’s from Edinburgh, Scotland in the All-Ireland junior club championship semi-final at the Monaduff grounds next Sunday November 17th, throw-in 1.30pm. We hope to see a large section of the Longford Ladies community out to the support them.

A.G.M: Final reminder that Longford Ladies county board A.G.M is on this Wednesday night, 13th November, in Aras ui Bhrian, Pearse Park. Thank you to Padraig O’Brien and Deniese O’Flaherty in Leader Sports for all their help and support during the 2013 Ladies football season.