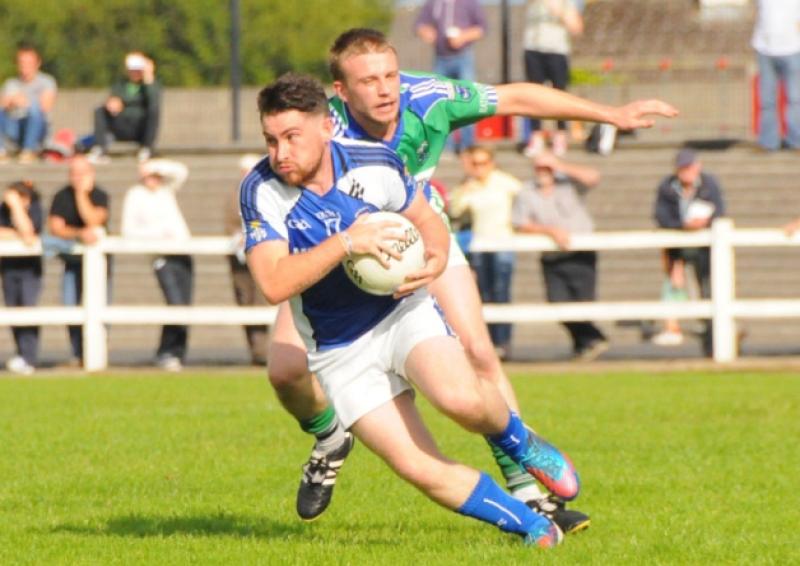 Rathcline breezed through their opening round encounter in the Intermediate Football Championship in cruising to a comfortable eight points win over Legan at Leo Casey Park on Sunday evening last.

Rathcline breezed through their opening round encounter in the Intermediate Football Championship in cruising to a comfortable eight points win over Legan at Leo Casey Park on Sunday evening last.

The Lanesboro side blitzed the Sarsfields straight from the throw-in but Legan suffered a serious setback early on after key players Niall Flood and Barry Tierney were forced to retire injured. Sarsfields endeavoured to quell Rathcline’s growing advantage but with five minutes gone on the clock, Tommy Keena’s side found themselves four points adrift.

Ratchline’s composure in front of the target was clearly evident inside the opening minutes. James Hanley got a terrific goal with only four minutes gone while a number of converted frees from Hanley and Shane Kenny put them in control.

Almost ten minutes has passed before Legan registered their first point. Oliver Hogan raised the white flag from the placed ball while a brilliant point from Paul Ross appeared to stem the tide somewhat.

County minor star Shane Kenny displayed his eye for the target over the course of the contest and finished up with an impressive 1-3. Kenny’s second half goal was worth the admission fee alone after he fended off a number of challenges before unleashing a powerful shot to the roof of the net.

Trailing by six points at the half-time break, 1-6 to 0-3, Legan needed to find a couple of early points to close the gap. Unfortunately for them all they could muster up in the third quarter was a solitary effort from Conor Quaine. Things went from bad to worse for Sarsfields later when Darragh Flynn was sent-off by referee Tony Gaffney for a second bookable offence.

In the closing moments, Legan got an opportunity for a consolation goal when they were awarded a penalty. Noel O’Neill stepped up to take the resulting kick but Rathcline keeper David Mulvihill pulled off a tremendous save to keep his net intact.