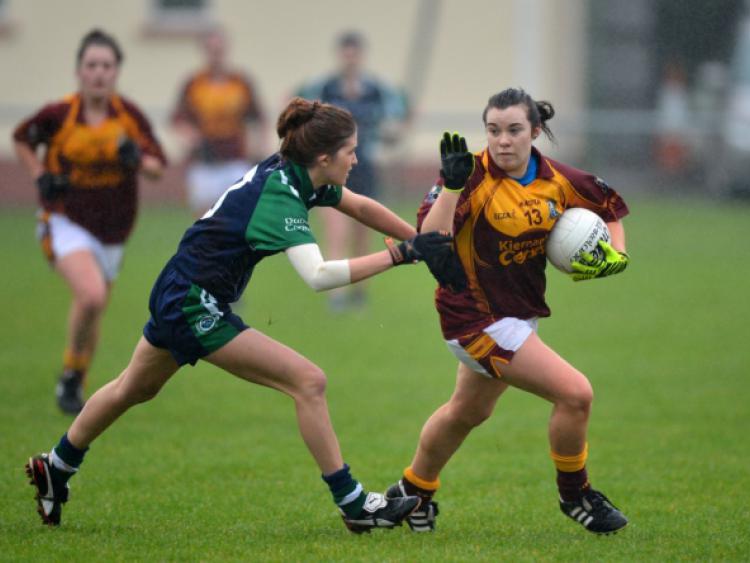 St. Helen’s quest for All-Ireland glory came to an end on Sunday last when they were beaten by an excellent Dunedin Connolly’s side from Edinburgh in wet and miserable conditions at the Monaduff grounds.

St. Helen’s quest for All-Ireland glory came to an end on Sunday last when they were beaten by an excellent Dunedin Connolly’s side from Edinburgh in wet and miserable conditions at the Monaduff grounds.

From start to finish the Scottish side were impressive with corner-forward Caoilfhionn Deeney exceptional, scoring two goals and playing her part in her side’s other three goals. They also had Edgeworthstown girl Claire Hannon (sister of Seamus Hannon) in their side; the forward got her name on the scoresheet in the 2nd half with a point.

Despite this defeat it has been an excellent year for the Drumlish/Ballinamuck side who represented their club and then county admirably. This year can only bode well for them and ladies football in the county.

Dunedin Connolly’s signalled their intentions early on and made a good start to the game. They got their first score in the 1st minute when Deeney fired over a free after Hannon was fouled. One minute later Rosanna Heaney followed up with their 2nd point.

Aisling O’Hara registered St. Helen’s first point in the 3rd minute and then points from Emma Farrelly and Leanna Kane put them ahead by one point in the 6th minute. A free from O’Hara in the 8th minute gave them a two point lead.

Dunedin got the next score; a goal from Deeney in the 14th minute to put them back in front. Another point from Farrelly levelled the game for St. Helen’s in the 24th minute but Connolly’s replied in superb fashion; Deeney grabbing her second goal in the 25th minute.

St. Helen’s rallied just before the break and two frees from the boot of Aisling O’Hara cut the deficit to just one point going in at the break, 2-2 to 0-7.

The opening score of the second half came from Deeney four minutes in but they were dealt a blow in the 38th minute when Aisling Kavanagh was sinbinned. However, St. Helen’s didn’t use the numerical difference to their advantage and missed two good scoring chances in a row shortly after.

In the 42nd minute Deeney turned provider for Deidra Sheils to score her side’s third goal. Points from Leah Donnelly and O’Hara (free) brought St. Helen’s to within three points of their opponents in the 51st minute but then they found themselves six points in arrears.

In the 52nd minute St. Helen’s gave away possession and it proved costly when Deeney played the ball into Anne-Marie Colbert who got her side’s fourth goal.

St. Helen’s had been clinical in front of goals in previous games but they just couldn’t find a way past a resolute Dunedin defence. Aisling O’Hara was on target again in the 53rd minute but the point was cancelled out by Claire Hannon with her side’s fourth point.

Dunedin got their fifth goal in stoppage time from Sheils and Deeney followed that up with a point. Despite the lengthy additional time St. Helen’s couldn’t get goals and two points from Aisling O’Hara (one free) and Orla Noonan left seven in it at the end.