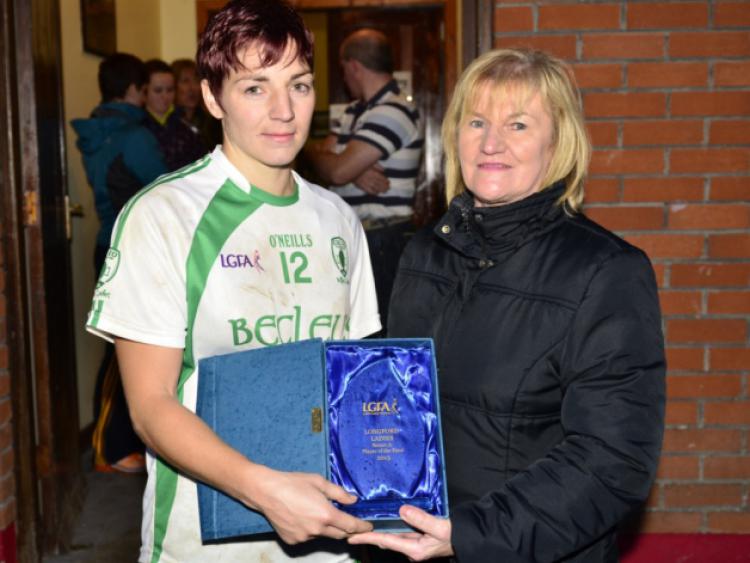 Killoe Ladies further cemented their position as kingpins of Longford Ladies Football when they overcame Clonguish on Saturday last to clinch their fourth senior ‘A’ championship title in a row and retain the much coveted Alison Smyth memorial trophy in its second Championship season.

Killoe Ladies further cemented their position as kingpins of Longford Ladies Football when they overcame Clonguish on Saturday last to clinch their fourth senior ‘A’ championship title in a row and retain the much coveted Alison Smyth memorial trophy in its second Championship season.

This was a fast paced physical encounter played on a damp and wet day in Leo Casey Park, Ballymahon. Killoe had to wait until the 55th minute to make sure of their latest success when Alison Kenny got a goal to put a cushion of 6 points between the sides.

After a shot from Clonguish defender Marie Brady hit the Killoe crossbar, hardworking player of the match Sharon Treacy cleverly delivered a long ball inside to the isolated corner forward Kenny who finished the ball to the back of the net again much to the delight of the Killoe support.

The title holders recorded the first three scores with points from play from Anne Marie Bratten, Jacinta Brady and Sabrina Hackett. Clonguish hit back in the 6th minute when full-forward Aoife Nolan got on the end of a high ball on the edge of the square and flicked it to the back of the net.

A second Clonguish goal from Cliodhna McGowan in the 20th minute kept it tight going in at half-time with Sharon Treacy’s excellent effort sailing over the bar to leave Killoe leading by 0-9 to 2-2 at the break.

As the second half progressed Clonguish’s Yvonne Barden after an altercation with Sharon Treacy was shown yellow and sent to the sinbin. Clonguish threw everything at Killoe in the closing stages but the champions remained composed to clinch the title with two goals from Alison Kenny, the second coming with time almost up.

The all conquering Killoe ladies don’t have much time to celebrate as they meet the Meath senior champions Seneschalstown in their first round Leinster club championship encounter on Saturday next and will enjoy home advantage as the game is fixed for Emmet Park, throw-in 2pm.