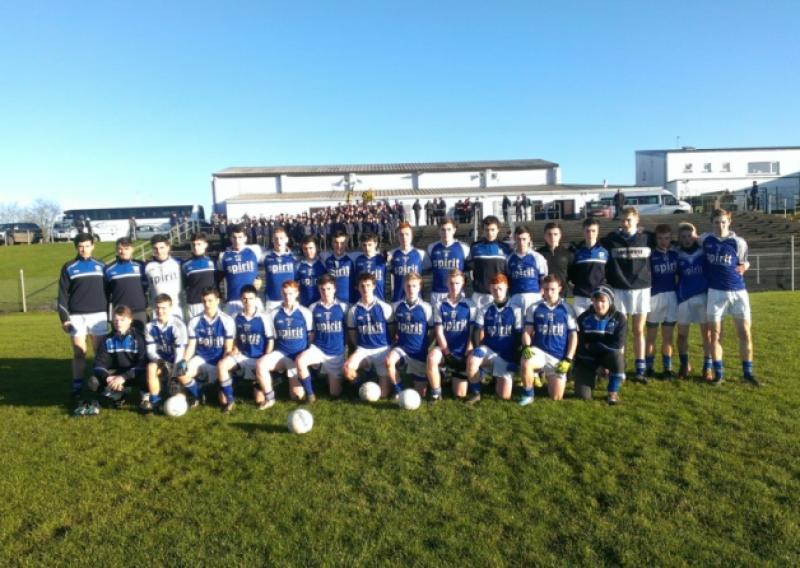 After playing well to get to the senior league final, St. Mel’s never got going in the title decider against old rivals St. Pat’s of Navan at the Simonstown Gaels GFC grounds on Friday last.

After playing well to get to the senior league final, St. Mel’s never got going in the title decider against old rivals St. Pat’s of Navan at the Simonstown Gaels GFC grounds on Friday last.

Six goals were conceded, four in the first half, as the Longford college suffered a setback in the build up to the Leinster Championship but are capable of making amends when the serious stuff starts on Friday January 9th away to St. Joseph’s, Rochfortbridge in the Round 2 clash.

There are obviously some lessons to be learned in the aftermath of a heavy defeat but it must be said that St. Mel’s produced a below par performance on this occasion and hopefully things will be different when they get back to full strength.

County minor Robbie Clarke (Longford Slashers) has been out of action for a while now with injuries also ruling out Shane Thompson (Killoe) and Paddy Duggan (Longford Slashers) against the Colm O’Rourke coached St. Pat’s side who were particularly lethal in attack as the scoreline clearly suggests.

It was a tight contest in the first quarter with the Navan school holding a slender 0-4 to 0-3 lead before midfielder Brian McGrath raced clean through to score the opening goal in the 14th minute.

Whatever hopes St. Mel’s had of getting back into contention were dashed when St. Pat’s clocked up two more goals in quick succession through Thomas O’Reilly (a cracking strike) and Padraig Diamond and things got worse when Podge McGowan shot to the back of the net in the closing stages of the first half.

There was no way back for rattled St. Mel’s, who trailed by 4-8 to 0-6 at the break with the scores coming from Darragh Doherty (three frees), Nathan Steele, wing back Peter Lynn and midfielder Joe Heaney.

Lynn was particularly impressive, with Heaney next best, during the course of the game and it developed into a damage limitation exercise in the second half.

St. Mel’s badly needed a goal quickly on the changeover and it almost materialised when Joe Heaney drove a shot across the face of the goalmouth. Peter Lynn burst through on another of his penetrating runs to fire over his second point in the 43rd minute and a further four consolation scores followed from Joe Heaney (2), Darragh Doherty (play) and lively substitute Clayton Finn (well struck free).

But St. Pat’s inflicted some more woe with two more goals from substitutes Charlie McGarry and Brian O’Connell (son of former Meath great Martin O’Connell) in the space of a minute and nothing really went right for St. Mel’s with Finn hitting the crossbar in the final moments of a best forgotten match.