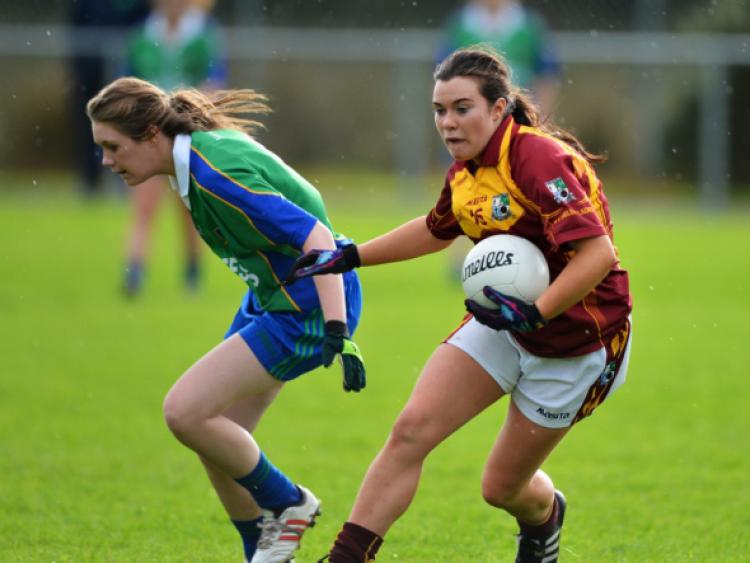 A fantastic 10 minutes of football in the early stages of the second half set St. Helen’s (Drumlish/Ballinamuck) on their way to a place in the Ladies Leinster Junior Club Championship Final against Monasterevin (Kildare).

A fantastic 10 minutes of football in the early stages of the second half set St. Helen’s (Drumlish/Ballinamuck) on their way to a place in the Ladies Leinster Junior Club Championship Final against Monasterevin (Kildare).

The semi- final against Offaly opponents Naomh Ciaran was played at the Monaduff grounds, Drumlish on Saturday last and St Helen’s had trailed by a point at the break after conceding a goal in first half stoppage time but the game quickly turned in their favour when they scored 2-5 without reply in a storming start to the second half.

With a strong forward line goals are guaranteed when St. Helen’s play but on this occasion they had performers all over the field and it was a real team effort. They played terrfic football and great credit must go to their management team of Ken Leonard, Stephen Cosgrave, Cian Brady and Joe Leonard.

It was the visitors who registered the opening score of the match in the 3rd minute but one minute later St. Helen’s were awarded a penalty after Emma Davis was taken down and Ashling O’Hara slotted home the spot-kick.

Roisin Egan (free) and Rose Ann Hogan levelled things in the 8th minute but Emma Farrelly and Ashling O’Hara (free) put St. Helen’s ahead again by the 12th minute. It was all square again in the 18th minute before Leanna Kane put St. Helen’s back in front one minute later.

Naomh Ciaran went ahead again in the 21st minute but St. Helen’s response was terrific as Emma Farrelly grabbed their second goal and Ashling O’Hara followed up with a point.

But the Offaly outfit ended the first half well and 1-1 from Rose Ann Hogan gave them a slender one point lead going in at the break, 1-8 to 2-4.

Two Ashling O’Hara points immediately on the resumption put St. Helen’s ahead and it was a lead they would not relinquish. Emma Farrelly hit over another point before Orla Noonan got the third goal in the 34th minute. Three minutes later they scored a fourth goal through Laura Burke.

Emma Farrelly and Leah Donnelly stretched the lead to 10 points by the 39th minute. Naomh Ciaran could only reply with a point before Ashling O’Hara (free) and Emma Farrelly added two more points but that was to be St. Helen’s last score for 12 minutes.

Naomh Ciaran fired over two points and got a second goal in the 51st minute but it was to be their final score as St. Helen’s keeper Sinead Corrigan denied them on a number of occasions. The Longford champions fired over three points near the end to win by the wide margin of 9 points and can now look forward to the Leinster Final in a couple of weeks time.