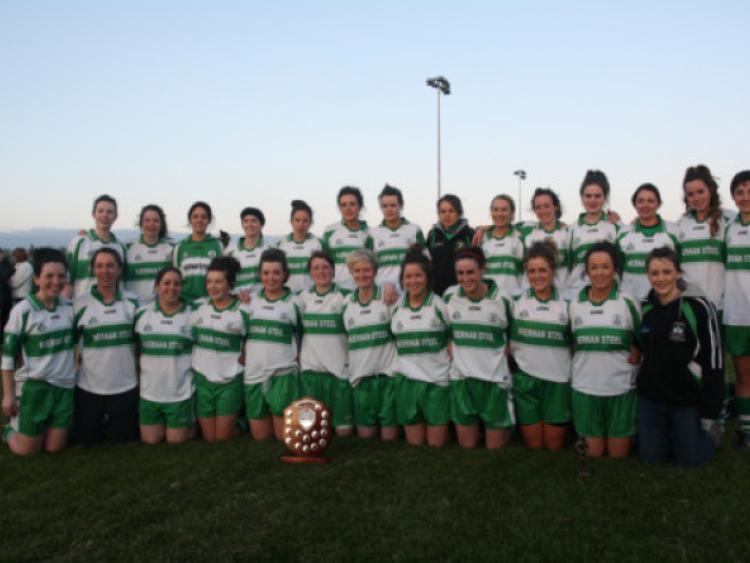 Killoe ladies produced a superb performance to win the Leinster Senior League 13-a-side title on Friday evening last in Kilcock as they beat Wicklow side AGB, the Arklow and Ballymoney amalgamation.

The game was over as a contest at half-time as Killoe held a commanding 5-10 to 3-3 lead. They shot some exceptional scores with Sharon Treacy immense and she ended the game with the terrific tally of 4-4 to her credit.

Jacinta Brady registered the first point of the game in the 2nd minute before Stephanie Martin replied for AGB with a fine point. Sharon Treacy and Sabrina Hackett fired over points before Anna McDonnell got Killoe’s first goal in the 8th minute.

The Wicklow side replied with a well-taken goal from Molly Byrne before Killoe regained control. A point from Sabrina Hackett in the 10th minute was quickly followed by a Sharon Treacy goal. Anne Marie Bratten got a point minutes later before Treacy again found the back of the net after lovely play involving Lizzie Brady and Hackett. Anna McDonnell followed with a point to stretch her side’s lead to 11 points.

Annie Conroy got a point for AGB in the 17th minute but Killoe replied with points from Treacy and Bratten. In the 22nd minute the exceptional Treacy got her side’s fourth goal. A free from Conroy and a Martin goal were AGB’s response.

But Killoe were on the attack minutes later and 1-1 from Sabrina Hackett in the space of two minutes put 15 points between the sides in the 28th minute. Sharon Treacy then got another point but right before the break AGB hit back with a good goal from Molly Byrne.

Killoe didn’t let up on the scoring in the second half. Barely 20 seconds had elapsed when Jacinta Brady got her second point. Anne Marie Bratten, Sharon Treacy and Sabrina Hackett were on target again to extend their side’s lead. Martin fired over a free for AGB in the 39th minute before Killoe hit four points in a row through Hackett (two), Treacy and Bratten.

Six minutes from time Hackett picked up the ball and had one thing on her mind as she grabbed Killoe’s sixth goal. AGB grabbed a consolation goal in the 60th minute but Bratten got the last score of the game one minute later as Killoe easily won the Leinster league title.