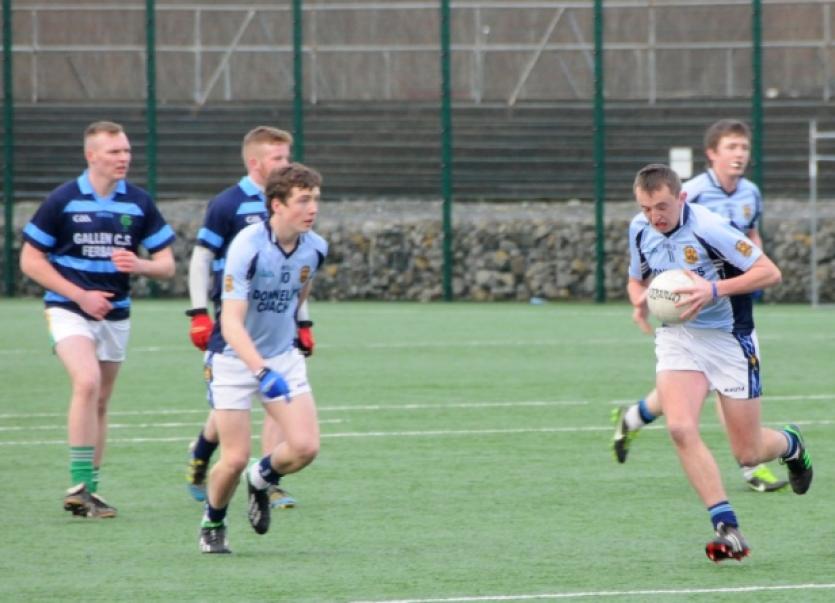 Cnoc Mhuire, Granard cruised into the North Leinster Post-Primary Schools Senior ‘B’ Football Championship Final with a landslide win over Colaiste Ris, Dundalk played in atrocious weather conditions at the Meath Centre of Excellence in Dunganny (situated on the outskirts of Trim).

Cnoc Mhuire, Granard cruised into the North Leinster Post-Primary Schools Senior ‘B’ Football Championship Final with a landslide win over Colaiste Ris, Dundalk played in atrocious weather conditions at the Meath Centre of Excellence in Dunganny (situated on the outskirts of Trim).

Despite the strong winds and lashing rain Cnoc Mhuire put in a fantastic performance on the astro truf pitch. Their forward line were on fire, the defence tight while Aaron Brady and Barry McKiernan controlled midfield and were involved in a number of the scores.

Playing with the aid of the wind the Dundalk outfit opened the scoring with quick points from Chris Sweeney and Tadhg McEnaney (free). Cnoc Mhuire got on the scoresheet in the 9th minute with Mark Kiernan getting their first goal of the game.

Dara Hamill levelled for Colaiste Ris before points were traded between Nigel Rabbitte and McEnaney. But two goals in quick succession by Rian Brady put Cnoc Mhuire ahead by 6 points by the 20th minute.

The second half belonged to the Granard school as they continued to be ruthless in attack with further points from Rian Brady, wing back Cian Brady and Barry McKiernan. Cnoc Mhuire got their fifth goal in the 35th minute when Aaron Earley found the back of the net with a superb strike and three more points followed from Rian Brady (2) and Aaron Brady.

Rian Brady and Mark Kiernan tagged on more scores and the lead was 25 points in the 50th minute before Colaiste Ris scored a consolation goal. Substitute Luke Kelly fired over two more points in this runaway win for Cnoc Mhuire.