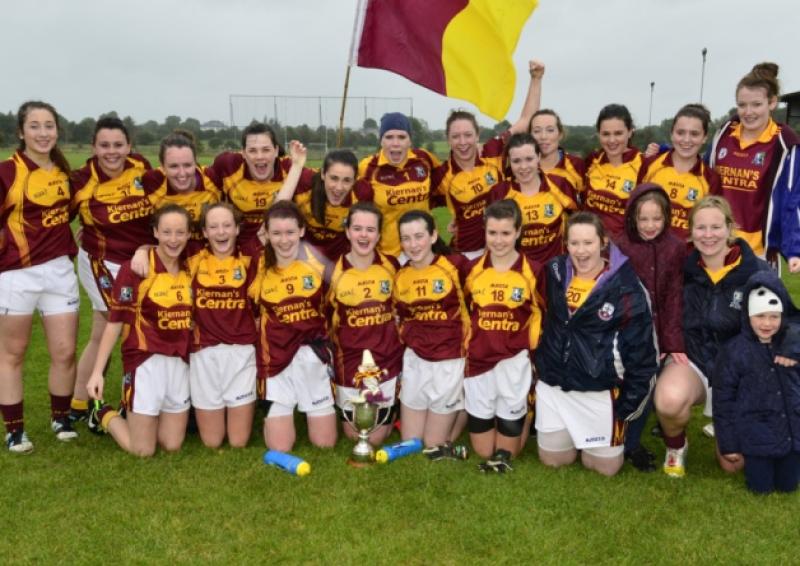 St. Helen’s ladies cruised through their first round Leinster junior club encounter against Dreadnots of Louth at the Monaduff grounds on Saturday last with a landslide 25 points advantage at the final whistle.

Impressive young corner forward Leanna Keane opened the scoring for St. Helen’s closely followed by a fine point from Emma Farrelly. Dreadnots pulled one back through a 14 yard free but failed to register another score until the 25th minute when a rare lapse in concentration in the St Helen’s defence allowed them to convert a shot on goal.

St. Helen’s very much retained the vast majority of possession throughput this game and kept the scoreboard ticking over, converting 11 points in the first half and 8 in the second half including three well taken frees from midfielder Aisling O’Hara. Their free flowing and open style of football was most impressive to watch and they beat the Dreadnots keeper on five occassions.

Talented team captain Orla Noonan acted as chief orchestrator, setting up a number of plays resulting in fine scores, and she was rewarded with arguably the goal of the game 8 minutes into the second half.

The Dreadnots scored 1-1 early in the second half but St. Helen’s re-affirmed their superiority with Noonan’s goal and added a further 1-7 to their tally in marching on to the next round of the Leinster junior club competition on the 6th of October against the Wicklow champions Blessington. Seven of the St. Helen’s Ladies got their name on the scoresheet including corner back Patricia O’Hara, who along with her twin sister Catriona, were most impressive in defence. Corner forwards Emma Farrelly and Leanna Keane dominated in the scoring stakes with the latter especially clinical finishing with 2-4 to her credit while Aisling O’Hara at midfield and Leah Donnelly at wing forward produced solid and confident displays.