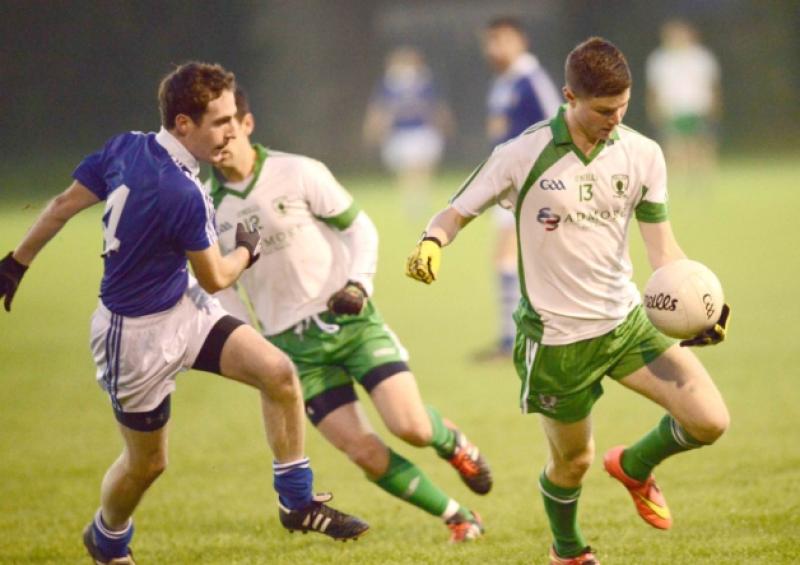 A penalty goal from Mark Hughes deep into stoppage time saved Killoe from a shock defeat against Granard in the Leader Cup semi-final at Emmet Park on Saturday night last.

A penalty goal from Mark Hughes deep into stoppage time saved Killoe from a shock defeat against Granard in the Leader Cup semi-final at Emmet Park on Saturday night last.

Just when it seemed as if St. Mary’s were about to record a famous win, a mistake in the defence gave possession back to Killoe who surged forward and the end result was the Hughes goal and Sean McCormack then followed up with a free to clinch a very lucky win.

Near the end Killoe had Simon Kiernan sent-off while Granard duo Jody Connolly and Vinny Nally were also sent-off. The county champions started well to fire over three early points and when Larry Moran scored a goal midway through the first half, Granard looked in big trouble.

Killoe continued to clock up the scores but St. Mary’s were thrown a lifeline when Stephen Lynch got a goal from a penalty just before the break and thus they trailed by 1-9 to 1-4 at half-time.

Granard produced a tremendous performance to stage a great comeback in the second half and Killoe can thank their goalkeeper Stephen Coy who produced a couple of good saves to deny Timmy Jackson and David Blessington.

In the 41st minute a Granard goal from Derek Sheridan closed the gap to a single point and the visitors then took the lead for the first time when David Blessington shot over the bar.

It was a real ding-dong battle from there until the finish and St. Mary’s looked to have snatched a place in the Leader Cup Final when Darren Gallagher scored a wonderful goal in stoppage time.

But Killoe showed just why they are the best team in the county when they regained the lead after Mark Hughes converted the penalty for the winning goal and it was tough on Granard who have made great progress this year under manager Niall Sheridan.