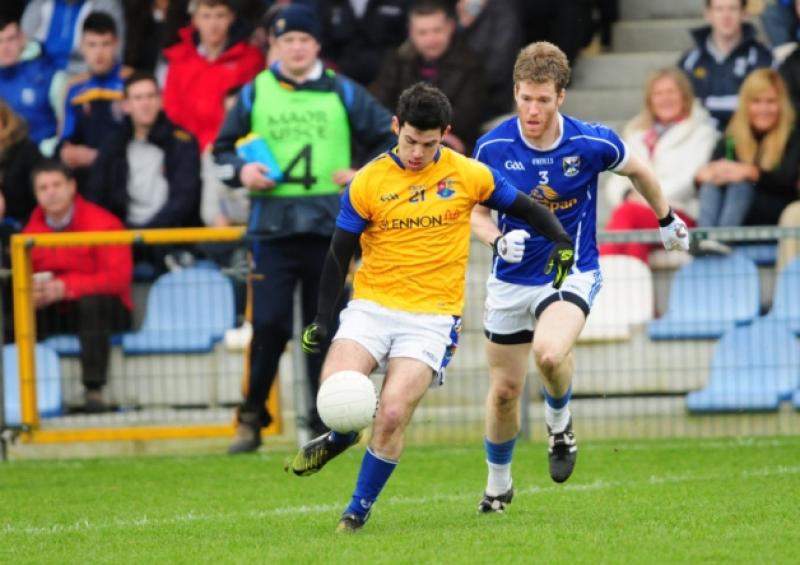 Longford were second best against Cavan for most of the National Football League clash at Glennon Brothers Pearse Park on Sunday last and ended up losing by two points, a result which leaves Jack Sheedy’s side in a fierce battle to avoid relegation in the so competitive Division 3.

Longford were second best against Cavan for most of the National Football League clash at Glennon Brothers Pearse Park on Sunday last and ended up losing by two points, a result which leaves Jack Sheedy’s side in a fierce battle to avoid relegation in the so competitive Division 3.

With pointless Offaly doomed to the dreaded drop into Division 4, Longford are currently fourth in the table but with only scores difference separating them from fellow strugglers Fermanagh, Wexford, Sligo and Limerick (all five counties having collected four points apiece) the demotion issue will go right down to the last round of fixtures on Sunday April 6th.

And with Longford facing difficult remaining games away to both Sligo (Sunday March 30th) and Wexford, the pressure is on for survival with at least one win required in the desperate bid to get out of trouble.

Cavan, on the other hand, are now celebrating promotion (along with Roscommon) after winning their fifth game in a row on Sunday last and should really have beaten Longford by a wider margin such was the superiority they enjoyed in this intriguing local derby watched by a big attendance of over 3,000.

Having said that, the home county apparently had a strong claim for a penalty ignored by Fermanagh referee Niall Cullen at a crucial stage of the game and might have snatched something had they managed to score a goal.

However, the general opinion was that Cavan were clearly the best team with powerful midfielder Gearoid McKiernan proving to be a real driving force - particularly so in the second half.

The decisive only goal came from a penalty converted by Martin Dunne in the 44th minute, awarded after a Longford player was penalised for handling on the ground in his frantic attempt to clear the ball off the line. In this same attack the always dangerous Kevin Tierney drove a shot against the crossbar and a scramble materialised before the penalty was given.

Longford were leading by 0-6 to 0-5 at that time but Cavan were dominating the exchanges right from the start of the second half and would have hit the front before that but for some poor finishing which almost proved costly.

The visitors kicked a total of 12 wides, as compared to 6 for Longford, during the course of the game and should have scored a goal in the 15th minute of the first half but for a brilliant double save by Longford keeper Paddy Collum who kept out point-blank efforts from Martin Dunne and Gearoid McKiernan.

And Dermot Brady came to the rescue when blocking down a goalbound shot from Dunne in the 61st minute. When you also take into account that Cavan hit the upright three times in the second half Longford can make no excuses for this disappointing defeat, although their cause was not helped with a few strange decisions by the referee going against them.

Cavan were generally first to the ball in enjoying the far greater share of the possession and a highlight of their tenacious teamwork was the effective manner of their slick foot passing in setting up several attacks.

Longford managed just two scores from play, through Brian Kavanagh and Michael Quinn, which tells it own story and all their other eight points came from frees converted by Sean McCormack.

And both sides ended the game with 14 players with Cavan’s Turlough Mooney first to go for a second yellow card offence in the 41st minute and Longford defender Colm P Smyth saw red in the 48th minute when he was sent-off for a challenge on Martin Reilly for what appeared to be a very harsh decision.

And three black cards were also issued by the referee, two for Cavan with Longford suffering a significant setback when Mark Hughes was dismissed on the rather stern application of the new rule after clashing with opposing defender Joshua Hayes in the very first minute of the game.

Peter Foy was the immediate replacement and Longford made a total of six changes, including the introduction of Paul Barden in the 57th minute, but he made little impact on his gradual return to action in a generally poor attack on Sunday last.

Cavan somehow ended up trailing by 0-6 to 0-4 at the break with their scores coming from Kevin Tierney (2), Niall McDermott (free) and Gearoid McKiernan, the latter bursting his way through to shoot over the bar in the 19th minute.

Four of Longford’s six points in the first half came from Sean McCormack frees; Brian Kavanagh fired over a well struck score in the 10th minute while Michael Quinn surged forward from the midfield area to land a terrific point in the 28th minute.

The Longford supporters were greatly outnumbered in the enthusiatic crowd but at least they had something to shout about in the first half and living in the hope that their side might end Cavan’s unbeaten run in the National League this season.

But Terry Hyland’s side came out with all guns blazing in the second half and after missing three good chances they eventually got their first score since the 23rd minute when Martin Reilly slotted over a fine effort with three minutes gone on the changeover.

Soon after came the all-important goal from a very well struck Martin Dunne penalty that left Cavan leading by 1-5 to 0-6 and they pushed on from there to extend their advantage.

A brace of points from Dunne (free and play) and another score from their industrious playmaker Cian Mackey (such a difficult opponent to contain) left Longford struggling badly before they eventually got their first score in the second half from a Sean McCormack free in the 59th minute.

Niall McDermott (on target from play) replied immediately for Cavan to leave them in a comfortable 1-9 to 0-7 lead and then Martin Dunne had a great goal chance to put the issue beyond all doubt, only to be denied by Dermot Brady who produced a courageous block to prevent the ball finishing up in the back of the net.

The losers, to their credit, battled it out to the bitter end but they never looked like getting the goal they so badly needed and the best they could do was three more points - all from Sean McCormack frees - as time ran out for Longford in their second home defeat in the league this season.