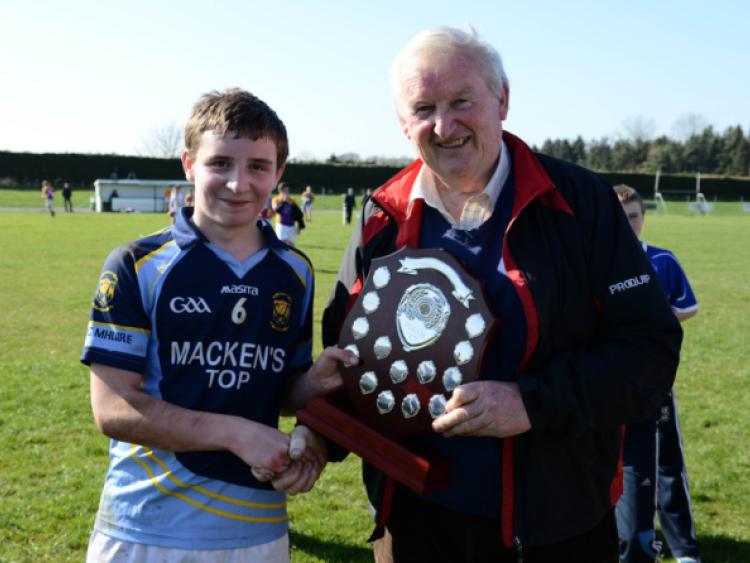 Cnoc Mhuire Granard’s terrific record in schools football continued when their U-14s captured the Leinster Juvenile ‘C’ title with a comprehensive win over Wexford CBS in the final at the Stradbally GAA grounds on Tuesday of last week.

Cnoc Mhuire Granard’s terrific record in schools football continued when their U-14s captured the Leinster Juvenile ‘C’ title with a comprehensive win over Wexford CBS in the final at the Stradbally GAA grounds on Tuesday of last week.

It’s another provincial crown for manager James Carroll who has enjoyed plenty of success with the Granard school in recent years. Cnoc Mhuire dominated the game from start to finish and only for some poor shooting and excellent goalkeeping from Wexford netminder Adam Dempsey the winning margin would have been even wider.

Cian Madden opened the scoring with a fine point in the 1st minute and further scores from Oisin Pearson, Madden (free) and Cormac O’Reilly gave the Granard school a 0-4 to 0-0 lead by the 6th minute.

Wexford’s first score came in the 8th minute from Jordan Hayes but Granard replied with fine points from Oisin Pearson and Evan Murphy. The gap though was cut to 1 in the 15th minute when Wexford scored a goal and a point. Cnoc Mhuire responded in fantastic fashion when Cormac O’Reilly finished to the net. The Mullahoran lad nearly got a second goal in the 19th minute but the Wexford CBS keeper Dempsey pulled off a great save.

Cian Madden tagged on two more points before Dempsey denied Ryan O’Reilly. Evan Murphy and Oisin Pearson fired over two points before Madden got the second goal for Cnoc Mhuire in the 30th minute. In stoppage time Murphy hit over a point to leave the Granard school in a commanding 2-11 to 1-2 lead at the break.

Minutes into the second half Oisin Pearson added another point to Cnoc Mhuire’s tally before Wexford CBS keeper Dempsey stopped another goalbound effort, this time putting Reece Reilly’s effort out for a ‘45. Wexford knew they needed a goal to get back into the game and got one in 42nd minute through Luke Dowdall.

Granard were then guilty of poor shooting and a point from Jordan Hayes and a goal from Cian Foley cut the deficit to 6 points by the 48th minute but that was to be their final score of the game as Cnoc Mhuire upped their performance and showed their superior class.

Cormac O’Reilly was unfortunate not to get another goal in the 50th minute but his shot hit the butt of the post. One minute later they did get a third goal; Cian Madden played the ball into Oisin Pearson and the Gowna lad made no mistake.

Substitute Martin O’Reilly fired over a nice score not long after he was introduced to stretch the lead to 10 points by the 54th minute and then a fisted effort and a pointed free from Cian Madden extended the commanding advantage.

In the final minute Wexford’s misery was complete when Leon Nolan was first black carded and then received a red for remonstrating with the referee. Just before the final whistle Reece Reilly hit over a nice point, the finishing touch to yet another Leinster title for Cnoc Mhuire Granard and one they thoroughly deserved.